Rules Guy: How much time do you have to make a change to your score? 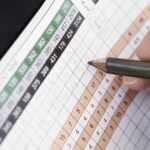 What do you do if you realize you reported the wrong score to your playing partner?

Apparently, this gentleman’s counting skills are right up there with his golfing skills. In stroke play, the scores just need to be correct when the scorecard is returned following the round. Until that point, such changes are a nonissue.

It’s a different situation in match play. Under Rule 3.2d(1), if the player giving the wrong score affected the result of the hole, i.e., he tied it rather than lost it, or won it rather than tied it, or won it instead of lost it (possible if he miscounted by, say, 2 strokes), he retroactively loses the hole. If his error didn’t affect the result — he lost the hole anyway (you made 8 or better), or he won it with the original 10 (to your 11 or higher) — the miscount is a moot point.