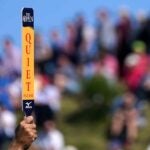 What do the rules say about creating your own silent environment?

I know you can’t have headphones on during a competitive round to listen to music, but what about earplugs? I can imagine some Tour pros wanting to improve their concentration by blocking out crowd noise. —Mark Reaume, Huntington Woods, Mich.

You mean to tell us that there may be pros out there who would prefer not to be bombarded with blood-curdling shrieks of “Bababooey!” and “Mashed potatoes!” from lager-sodden lunkheads? Rules Guy is shocked, shocked!

The same rule that applies to headphones applies to earplugs. Listening to music in and of itself isn’t a breach, but rather doing so to eliminate distractions or help with swing tempo and such. So, if Tommy Rabbit-Ears puts in earplugs to try to block out noise, he’s in breach of Rule 4.3a, with the general penalty for the first breach and a DQ for the second. Argh!!!

For more rules-related guidance from our guru, read on …

Living in Southern California has its advantages, like playing winter golf, but also its drawbacks. Late one afternoon, I had a 40-foot eagle putt where the sun was directly behind the pin at ground level — standing at my ball, looking at the pin, the glare meant I couldn’t see the pin, much less read the green. Could I have had the other players in the foursome stand to block the sun, or would that have been a Rules violation? Needless to say, I three-putted for par. —Tony Fina, Camarillo, Calif.

Either way, you’re in California … shouldn’t you always have cool sunglasses at the ready?