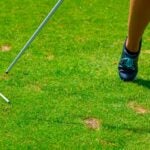 What do the Rules say about replacing a broken club mid-round?

My driver head shattered on the 8th hole during a recent round. At the turn, I ducked into the parking lot and grabbed a different driver that I had in my car. Different model, different specs. After the round, my playing partners felt I was due penalty strokes for using 15 clubs. Are they correct? —Lloyd Warner, via email

As is often the case with the rules, and to some people’s consternation, the answer is definitely … it depends.

If Model Local Rule G-9 is in effect, as it very often is across most golf organizations, you are at liberty to swap in a replacement for a significantly damaged or broken club, assuming this happened during the normal course of play rather than in a fit of pique. (The rules do not give succor to the petulant.)

The substitute need not be the same make and model, nor even the same type of club — if you wanted to sub in a lob wedge for the driver, that’s your prerogative. And had you had fewer than 14 clubs in your bag to start, you’d have been free to add a club or clubs into play mid-round (without unduly delaying play) until you reached the 14-club limit.

However, if Model Local Rule G-9 isn’t in effect, you couldn’t sub in a replacement 14th club, period. Doing so would result in a two-stroke penalty per hole with a maximum of four strokes in stroke play, and an adjustment to the state of the match in match play, determined at the completion of the hole where the breach is discovered, with a maximum of two holes.

You must remove the club from play as soon as you become aware of the rules breach or be disqualified. Note, too, that in this scenario the rules breach is triggered once you make a stroke, with any club, once the new club has been added to the bag — it doesn’t matter when or if you use that new club itself.