Rules Guy: Are you allowed to aim your partner’s putter before they take a stroke? 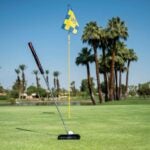 Can another player aim your putter for you?

My wife has one of those putters that stands on its own as she surveys her line. I know the rules state that in team competition I can’t stand behind my partner and align her as she’s taking her stance, but is it permissible for me to align the putter for my wife so that she can simply grip it and roll her putt?
—Mike Sprouts, Wallburg, N.C.

Rules Guy once tried to align Mrs. Rules Guy on the course; she threatened to realign the balatas in his bag, so to speak.

That said, since this is all prior to making the stroke and Mrs. Sprouts hasn’t begun to take her stance, you and your betrothed aren’t running afoul of Rule 10.2(b)5 (which regards physical help making a stroke) or Rule 10.2(b)4 (aka “the caddie rule”), respectively. You’re just using a weird putter as it was intended to be used (sort of) and sowing seeds of marital discord.

Read on for more putting-green guidance from our guru …

I’m a player who can’t wait to see the ball go in (or miss) the hole when putting, so I tend to look up too early. To cure this habit, I wrote “Don’t look” up on top of the putterhead as a reminder. A buddy hinted that I may be violating a rule. Am I?
—Romy Dionisius, Tempe, Ariz.

In a word, no … assuming that you’re using, say, a Sharpie. Engraving is also legal. (Rules Guy has “Make this…or else!” tattooed on his own flatstick.)

You could run into issues that might render the club nonconforming by taping or otherwise fastening instructions to old Billy Baroo. So, please, no Post-It notes or dry-erase boards.