Rare ruling at Solheim Cup was unfortunate. Here’s why it was also sensible 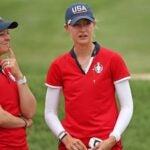 That putt was never going to fall. OK, not never. One time in a thousand, in a situation like Nelly Korda’s Saturday afternoon at the Solheim Cup, a rogue wind will suddenly materialize, sweep across a green and cause a dead-still ball, sitting on a lip, to drop.

Far more often, lip balls that eventually drop are teetering. That’s why the 10-second rule exists, to give that overhanging, teetering ball a chance to drop.

The logic is the logic. The rules don’t allow a player to hit a moving ball. Not from a fairway, not from the rough, not on the green. So if a ball is sitting on the lip — if, per Rule 13, any part of the ball is hanging over the lip — a player gets 10 seconds to allow the ball to drop. That is, 10 seconds after the player takes a reasonable amount of time to get to the hole.

Nelly Korda never got her 10 seconds, on her putt on 13 to win a critical hole in a tight match. She never got one second. The American’s golf ball wasn’t teetering. You’re tempted to say it was never going to fall. But part of her ball — 30 dimples, something like that — was over the hole. She was, by the rules, owed the chance for some weird thing — a rogue wind — to materialize. She didn’t get that chance when one of her opponents picked up her ball.

The walking official, Missy Jones, an American, made the call. And she got it right. The only question for her was this: is part of the ball hanging over the hole?

Yes, part of the ball was hanging over the hole. She could see that with her naked eye in real time. The TV footage confirmed it.

Nelly Korda was doing yoga on the 13th green — the You Cannot be Serious pose — when her ball was picked up. That means her count-to-10 never even got started.

On such little things individual matches, with a single point hanging in the balance, can turn. And on any one point, a whole match can turn, too. Golf is a game played on a big field but it unfolds on a million little things.

For those who might need a catch-up: Saturday morning, in alternate shot (foursomes) the Europeans, on paper huge underdogs, won three matches and tied the fourth. Your lunchtime score: Europe 3.5, U.S. 0.5. The American team of Nelly Korda and Jessica Korda lost, 1 up, to the European team of Mel Reid and Leona Maguire. First team to 14.5 wins the cup. Yes, they’re playing for a cup. How cool is that?

On Saturday afternoon, in a four-ball (better ball) session, Pat Hurst, the American captain, decided to break up the Korda sisters. Jessica sat. Nelly played with Ally Ewing, in the leadoff position. They played the formidable pairing of Nanna Koerstz-Madsen and Madeline Sagstrom. Through 12 holes, the match was tied.

The walking official, Missy Jones, an American, made the call. And she got it right.

The 13th hole at the host club (Inverness!) is a short par-5. Madsen made a birdie 4. Korda had about a 20-footer for an eagle 3. That is, to win the hole. Her putt was a sweeping, hooking downhiller on a gorgeous and tilting Donald Ross green. She read the speed and break beautifully. When the ball stopped it was sitting on the lip. Six seconds after it came to a stop, Sagstrom, picked it up.

The Americans won that hole to go 1 up in the match. The Korda-Ewing team held on to that 1-up lead through the 18th green. At that point, The Americans no longer had a half point. They had 1.5. That’s better.

“You don’t want to win a hole like that,” Korda told Golf Channel’s Kay Cockerill moments after the match was over. “It’s very unfortunate.”

No, the rules don’t allow that.

*Couldn’t the rules official just let it go? Because, it wasn’t like it was teetering.

No. In golf, as in life, you’re responsible for what you know. And the rule doesn’t say anything about teetering. It says if any part of the ball is hanging over the hole.

No, it’s sensible. You don’t want to not give the ball a chance to fall. But you don’t want to be out there all day, either. Ten seconds is a good amount of time. Not too much. Not too little.

In the Saturday afternoon better-ball session, the Americans won the first point and the second point. The Europeans won the third point.

In the day’s last group, the European team of Georgia Hall and Leona Maguire had a 1 up lead over the American team of Yealimi Noh and Brittany Altomare as they came to 18. Marching up the fairway, a rogue wind came up. You could see it, even on TV.

You could see the wind in the trees, in the American flag by the clubhouse, in the flying sand of a bunker shot, in Altomare’s flapping ponytail — and on the green, where the striped flagstick was doing its own little dance. Rogue winds are a thing. Balls overhanging a cup do fall. The rules give you 10 seconds for a reason. You don’t need a stop watch. One Karsten Solheim, two Karsten Solheim, three Karsten Solheim, all the way to 10 — that’ll do. If it’s your ball on the lip, you beg for wind, but you keep it to yourself.

Try this setup trick to roll rock-solid putts every time