Have raised cups made golf any easier? Here’s what the data says 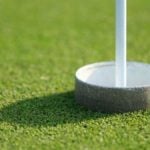 To count a made-putt on a raised cup, or not to count it. That is the question.

One could argue that some of the safety measures in place at the Charles Schwab Challenge, and in the ensuing three events on the PGA Tour schedule, might ever-so-slightly hurt scoring.

No fans means no trampled-down lies in the rough. Players also won’t have the luxury of hundreds of eyeballs searching for their wayward shots, or a tugged tee shot bounding off a spectator and back into the fairway. These instances are rare, yes, but you know what they say: every stroke counts.

In the recreational game, there’s an opposite dynamic at work, thanks to the raised cups in play at many golf courses across the nation. If we can agree that striking any part of an elevated cup liner is easier than holing a putt in traditional fashion, America’s golfers are likely recording more pars and birdies than ever before. As Bill Pennington wrote the other day in the New York Times, “Counting those putts as holed has unquestionably lowered the scores of thousands of golfers in the past few months, according to dozens of course operators and golfers interviewed last week.”

At golf courses that have continued with submerged cups or holes stuffed with pool-noodles, it wouldn’t be too much of a leap to assume that gimmes have become more generous. Or at least one would hope they have. The less frequently you have to stick your hand into or near a cup, the better.

So, what of it? Has scoring among the golfing masses actually improved during the Covid era? The data says no.

“The number of golfers playing to their handicap or better is as expected with no anomalies observed,” Steve Edmondson, the USGA’s managing director of handicapping, course rating and GHIN, told me in an email. ”This is after reviewing over 20 millions scores posted. In other words, there are not more people suddenly playing to or better than their handicap, but instead, playing a few shots above as expected.”

Edmondson added that one of the goals of the new World Handicap System that was enacted on Jan. 1 was to prevent extreme movements of handicap indexes, so whatever scoring benefits the new safeguards might offer quite possibly have been neutralized by the new handicapping algorithm.

In the early days of the virus scare, Edmondson said, the USGA did receive inquiries from a handful of clubs about how their players should determine whether a putt was holed on a raised cup. “The players were playing to strike any part of the raised hole-liner which is very different than using Most Likely Score procedures as if they were holing out,” Edmondson said. “We have since worked with those clubs to correct the scores in the system.”

According to the Most Likely Score guidelines, players, in their best judgment, should assess whether their ball would have been holed more than 50 percent of the time had the hole-liner not been raised. (For more on the USGA’s Covid-related rules and handicapping procedures, click here.)

Another difficult scoring call for golfers playing on raised-cup greens: holes in one. If your tee shot is tracking toward the hole and clanks off a liner, you gotta count it, right — Most Likely Score rules be damned? Props to the noble golfer who does not.

But have Covid cups resulted in more aces? Reliable hole-in-one data is hard to come by, but Connor Huck, the officer manager at the National Hole in One Registry, told me that his company typically registers about 280 aces per month and that over the past couple of months that number has been closer to 180-200. (To be fair, with many courses closed in March and April, there have also been fewer rounds played, so make of that stat what you will.)

As for whether a raised-liner ace should count, Huck said golfers should use their conscience as a guide.