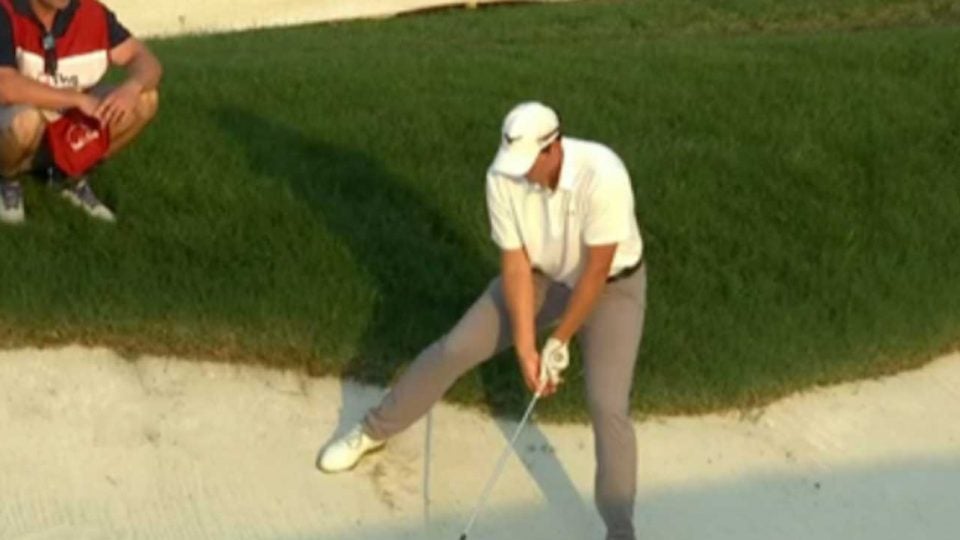 Adam Schenk reportedly did not step off this stance Friday before hitting his shot.
Twitter.com/RandallMellGC

Just weeks after rescinding a penalty at the Waste Management Phoenix Open, the PGA Tour has done the opposite: it has penalized a player retroactively.

Adam Schenk was docked two strokes Saturday for violating Rule 10.2b(4) during his second round Friday. Schenk’s caddie lined up behind him, scouting the 17th green as Schenk was in a greenside bunker. According to a statement released by the PGA Tour, Schenk “did not take any action subsequently to absolve him of penalty.”

According to the Tour, Schenk could have backed out of his stance to avoid penalty, but didn’t, and he therefore recorded a triple bogey 6 instead of a bogey 4. It is a significant penalty as Schenk originally carded a 1-under 69 and was in the top 10 at the end of play Friday.

Golf Channel’s Randall Mell was able to track down an image of Schenk and his caddie prior to the shot.

The rule Schenk violated is Rule 10.2b(4), which reads “The player’s caddie must not deliberately stand in a location on or close to an extension of the line of play behind the ball for any reason.”

In early February, Denny McCarthy was penalized for violating the rule at the Waste Management Phoenix Open, but the Tour rescinded it a day later. The USGA subsequently released a statement saying, “The USGA and The R&A recognize that further clarity on how to appropriately apply this Rule is needed. We are committed to assessing its impact and will provide the necessary clarifications in the coming days.”

Schenk quickly rallied during his third round, earning those two strokes back with birdies on the first and fourth holes. Justin Thomas, who has been as vocal as any pro about various rules changes, weighed on Twitter in a very simple way.