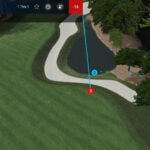 An illustration of where Lee Westwood's ball landed in the water and where he dropped.

In the final round of the Players Championship, Lee Westwood hit his second shot on the par-5 2nd at the Stadium Course at TPC Sawgrass from the right rough.

It appeared to poke a tree in the right rough.

It appeared to roll into the water by the right rough.

But Westwood did not drop in the right rough.

Westwood hit his next shot from the fairway about 10 yards to the left of where his ball has appeared to plop into the water. A PGA Tour rules official told Daniel Rapaport of Golf Digest that Westwood was “just going by what his eyes tell him, and he’s exercising reasonable judgement.” The official, Gary Young, added that he was “very comfortable” with the drop.

“You have to kind of know the terrain in that area,” Young told Golf Digest. “He punches the shot out, and what happens is, it drops off into a bunker. Then there’s a little spit of land before it goes into the water. So all [Westwood] sees it go over that shelf and down. It hits and kicks to the right, toward a penalty area stake that was there.”

From Westwood’s perspective, Young said, he was taking proper back-on-the-line relief through Rule 17.1d, The rule also allows a drop one club length to the left or right of that line.

“So that got him a little bit further to the left,” Young said. “I think that’s what most people are wondering, like, how did he get so far to the left?”

Young told Rapaport that the Tour had “taken a look” at the drop. Westwood would bogey the hole, shoot an even-par 72 and finish one-stroke behind Justin Thomas.