‘He got away with that’: Pro receives wild rules break after bunker mishit 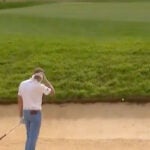 Ben Evans on Saturday after his second shot on the 4th hole at the London Golf Club.

Ben Evans, after hitting his drive into a greenside bunker on the par-4 4th at the London Golf Club, hit his second shot into the mud above it, his yellow ball making the sound of a baseball hitting a glove upon impact. Evans looked down, took off his visor and scratched the back of his head.

“Ohhhh noooo,” an announcer said on the broadcast.

While the preferred play, of course, would have been to hit out of the bunker safely during Saturday’s third round of the European Tour’s Cazoo Open, this result may have been the next best thing.

“I get a feeling he’s going to need a ruling,” another announcer said.

That he did. Evans’ ball had plugged into the dirt about an inch above the sand. Evans and the official agreed that the ball was embedded in the general area, and he would be given relief according to Rule 16.3b, which states: “When a player’s ball is embedded in the general area and relief is allowed under Rule 16.3a, the player may take free relief by dropping the original ball or another ball in this relief area.”

In this case, the rules official determined, the relief area was directly above and to the left where the ball embedded — which was out of the lip and the bunker, and believed to be no nearer to the hole. One Twitter user, after the European Tour posted video of the sequence, wrote what easily could have happened: “How many of us would have taken an unplayable and dropped back in the bunker? Instead it’s a free drop outside of the bunker for a ball embedded in the soil, not sand. I need these referees for my weekend comp”

From there, Evans would pitch to about 6 feet and bogey the hole.

“He got away with that,” a third announcer said on the broadcast. “I mean, that was amazing.”