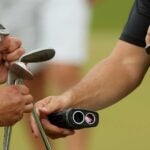 Rangefinders were allowed at this year's PGA Championship.

Brett White, as first reported by the Fire Pit Collective’s Ryan French, was disqualified during the final round of Saturday’s Colbert Charity Classic on the mini-tour All Pro Tour for having his rangefinder on “slope mode” on multiple shots. It is a violation of Rule 4.3 of the Rules of Golf, which states that “measuring elevation changes” is not allowed.

“On the 3rd tee box during round 4 my playing partners noticed my rangefinder clicked on slope mode,” White tweeted. “I did not notice it was on until after my fourth shot. While it was a complete accident, intent in this situation does not matter and I was DQ’d. Tough pill to swallow.”

White had entered the final round at Colbert Hills in Manhattan, Kan., four shots out of the lead and in the final grouping with Hayden Wood, the 54-hole leader, and Zach Bachou, who was two strokes back. Wood, the son of longtime pro Willie Wood, would win the tournament and $23,000.

Kyle Gaines would finish second and win $9,700, and Matt Cole and Austin Jordan tied for third and earned $5,625.

Rangefinders are not allowed on the PGA Tour, but they were permitted at this year’s PGA Championship.

“Due to multiple accidental breaches of Rule 4.3a(1), measuring elevation changes from a distance measuring device, Brett White was disqualified from the Colbert Charity Classic during play of the final round,” the All Pro Tour tweeted.