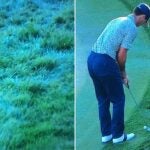 Billy Horschel’s lie was hellacious. But his break because of the rules? That was a godsend.

No doubt. During Saturday’s third round of the Arnold Palmer Invitational, Horschel’s second shot on the par-4 18th at Bay Hill ended up in the cabbage behind the green, only for Horschel to be granted a drop to the left — and in the first cut of rough — because of a sprinkler head that would have interfered with his stance. And from there, rather than likely having to chip, Horschel putted, his ball dropped for a birdie three, and he’ll enter Sunday’s final round in a share of the lead.

“The ball initially was in one of the worst lies I’ve seen this year,” Mackay said on the NBC broadcast. “I wasn’t sure he would get it anywhere near the hole, maybe not even get it on the green. And now, of course, putter out.”

Rule 16.1b spelled out where Horschel could drop. He was allowed to find the “nearest point of complete relief in the general area” and take a club length from there, so long as the ball was not closer to the hole. According to the PGA Tour’s online scoreboard, Horschel’s ball was 28 feet, 1 inch from the hole before the drop, and 28 feet, 5 inches after.

But was it OK to go from the thick stuff to the not-so-thick stuff? Yes, according to an interpretation of the rules. That interpretation reads: “If a player receives a better lie, area of intended swing or line of play in taking relief under Rule 16.1, this is the player’s good fortune. There is nothing in Rule 16.1 that requires him or her to maintain identical conditions after relief is taken. For example, in taking relief from a sprinkler head (immovable obstruction) in the rough, the player’s nearest point of complete relief or relief area may be located in the fairway. If this results in the player being able to drop a ball in the fairway, this is allowed.”

After the drop and made putt, Horschel pumped his right fist. He and Talor Gooch will start Sunday’s final round with a one-shot lead over Viktor Hovland.

“Well, that is taking advantage of the rules and then some,” announcer Dan Hicks said on the broadcast.