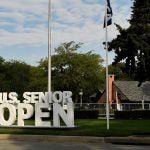 Marcus Meloan, who was seven shots out of the lead to start the third round of the U.S. Senior Open, was not allowed to continue after 14 holes on Saturday due to a rarely used time rule.

Meloan, according to USGA rules official Ben Schade, was five minutes late after play resumed after a three-hour storm delay at Omaha Country Club, in Omaha, Neb., and he was forced to immediately withdraw. The infraction is an application of Rule 5.3, which states that if a player reports five minutes late or less to a starting time, a two-stroke penalty is incurred; if it’s more than five minutes, a player is DQ’d.

“Following that restart, we did have a player that was late to resume,” Schade said on the Golf Channel broadcast. “So resumption times, they work very much the same as a starting time that we would have at the beginning of our round where we need to be ready to play within five minutes of that time, no later than five minutes of that time, to avoid disqualification.

There was no immediate word on why Meloan, a 56-year-old California native, was late to the resumption of play. He shot a four-over 74 in the first round, then shot a 69 in the second, one of two players, along with 36-hole leader Jim Furyk, to break 70 in Friday’s morning wave of tee times, played under more difficult conditions. On Saturday, he started seven strokes back of Furyk, then was two-over through 14 holes when play was suspended.

“How do you miss the start time?” analyst John Cook said on the Golf Channel broadcast. “I’m sorry, that’s just … “

“Especially when everybody else makes it,” analyst Lanny Wadkins said.