Cameron Smith had an ironclad putting routine that was the same every time — to the second.

AUGUSTA, Ga. — Scottie Scheffler had earned his lead, but for large parts of the day, it never felt as comfortable as it perhaps deserved to.

How could it? After all, it’s the moment you can relax that the sniper pulls the trigger on the dot circling on your back. And Cam Smith, one of best putters on Masters Sunday, was going hunting.

Ultimately it wasn’t to be. It wasn’t his putter that failed him, but the rest of his game. A series of poor drives, culminating in what he called a “terrible swing” on the 12th send his hopes of of a green jacket into Rae’s Creek. When he hit good shots, he made birdies — like on the 11th hole, the most difficult of the tournament. His putter couldn’t make up for when he didn’t.

Yet like Ben Crenshaw before him, Cam Smith seems like one of those generational putters that’s going to keep contending at this tournament.

“I’m frustrated not to walk away with a win yet,” he said after his third top three, and fourth top 10, in his last five starts here. “I love it here, and I look forward to the challenge of coming back here next year.”

When he does, it will be his magical putter that leads the charge. Watching Cam Smith up close on Sunday as he attempted the impossible — catching the best player in the field — may not have yielded a green jacket for the Australian, but I walked away from what felt like a masterclass in putting.

Here’s what I learned along the way.

Moving from tee-to-green feels like a bit of a game of roulette with Cam Smith. But the moment he walks into the green, he looks entirely in his element. The crowd feels it, and he knows it. Comfortable, confident, and composed.

Gametime starts and ends with his routine, which runs like clockwork. He marks his ball then walks behind the hole, looking at the entire length of the putt as he does.

When he gets to the hole, he stands behind it and crouches down to get a closer look at it. Then he walks back to the ball from the other side. He stops at the mid point of each putt as he does, sets up and takes his stroke, then back to his ball. At that point, he steps into the putt.

It may sound like a lot, but Cam Smith actually plays quite quickly. He glides through each step without delay and doesn’t linger on any of them. He’s entirely focused on the process, and he does the same thing every time. Just because he’s taking in a lot of information doesn’t mean it’s an excuse to play slowly.

With his ball placed on the ground, Smith steps into the putt and spends 10 seconds over the ball. Trust me, I timed it, and on each putt it stays true to the second.

The steps don’t waver, either: He takes three quick looks at the hole, while shuffling his feet and regripping the club. Then when he settles in, takes one long look at the hole and hits his putt.

Nothing changes, regardless of putt. The only thing that changes is whether he uses the line on the ball, which changes based on whatever feels most comfortable on the given putt.

A rare birdie at No. 11 gives Cameron Smith a jolt.

After Scheffler's par, he's three shots back with seven holes to play. pic.twitter.com/Ly0vtXkl5w

3. Take a moment to lock in

My favorite part of Cam Smith’s putting routine is the final moment before he hits the putt. All the movement comes to a subtle stop, and he takes one, long, deliberate look at the hole. It takes about six seconds, by my count, and it Smith says it’s the most important part of his entire routine.

“Taking that last look, seeing the ball roll over the the front with the pace that you like, doesn’t matter with it’s two feet of 100 feet,” he says. “It’s something I’ve always done and I think it’s key.”

4. Above all else, good speed

It’s interesting and telling that Cam Smith mentioned “pace” when visualizing his putt, because all day, Cam Smith seemed to roll the putt with perfect speed. They didn’t all go in, but did they all seemed to end with a tight radius around the hole. Hitting with the right speed is even more important than hitting it with the right line, he says, and he visualizes that by looking at a side of the hole, instead of the center.

“I love seeing the ball going in the side of the hole,” he says. “That’s my focus.” 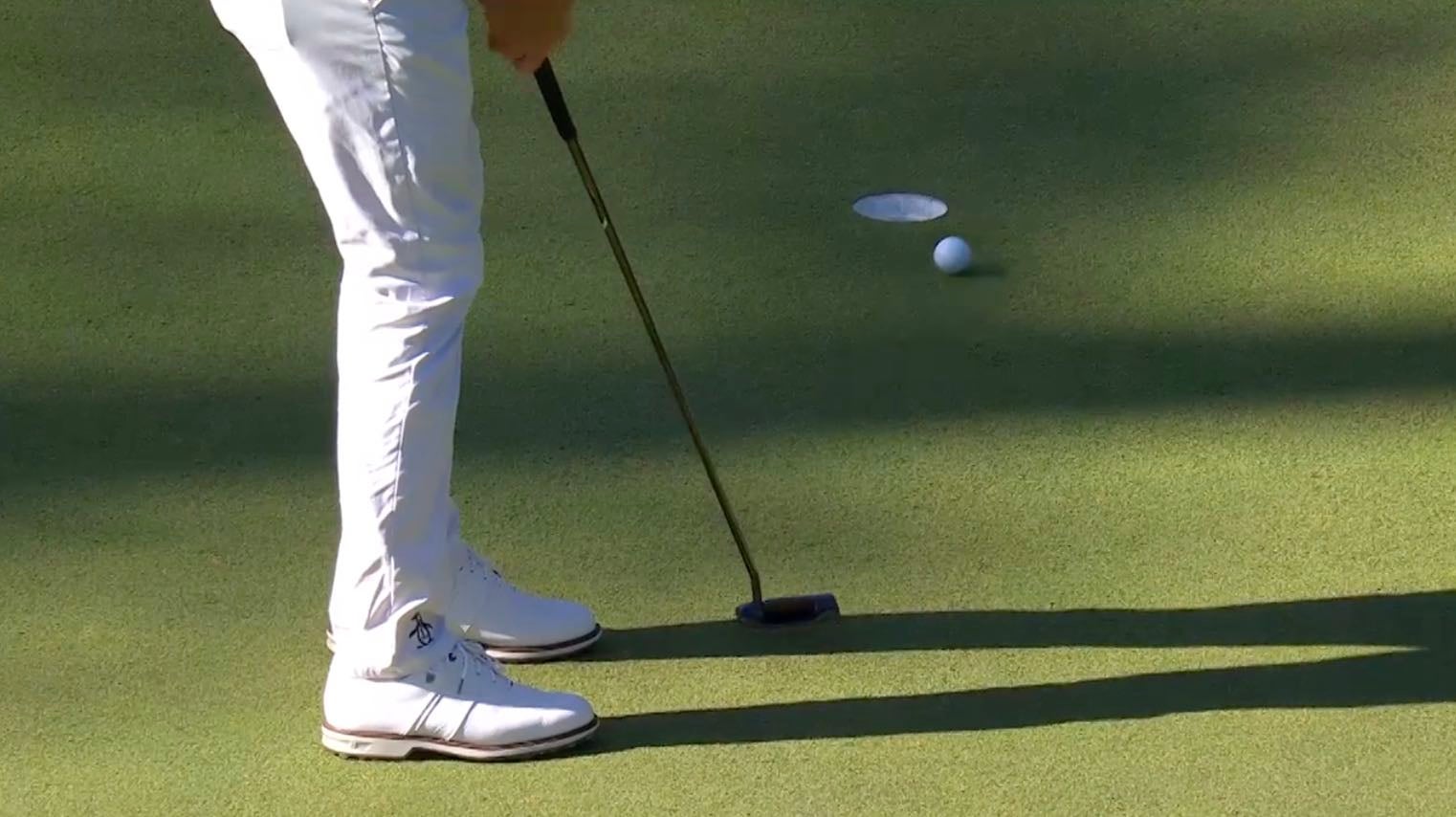 5. Even the best make mistakes

And finally, for as great a putter as Cameron Smith is, it’s important to note that not every putt went in. He badly under-read a putt on the 11th hole, and after a mental error on the 12th hole, he was visibly angry. He clearly let it affect his nine-foot putt for double bogey, which he hit too hard and through the break. A basic mental error that one of the best putters in golf could’ve — should’ve — avoided.

It just goes to show that putting (in the least surprising news ever) is really difficult. Cam Smith may be the best putter on the planet today, and yet he even makes multiple mistakes during a high-pressure round. The secret isn’t avoiding them altogether, it’s accepting them and bouncing back.