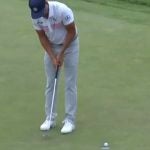 I’ve played a lot of golf, and watched even more. I’ve had plenty lip-ins and lip-outs along the way, but I can safely say that I’ve never seen one this severe.

It happened on the 16th hole during Fowler’s second-round 71 at the Rocket Mortgage Classic. On the green in two, he lagged a long birdie putt to within three feet, and the par putt looked like a relative non-issue.

Except it was anything but.

The putt enters the hole in the right center, and rides the lip all the way around the hole before entering past where it initially entered the cup. It almost looks fake, but it’s not, as you can see below.

A lip out this severe is only possible if the putt is hit at an exacting speed and, crucially, enterers the hole at a specific location. Fowler obviously didn’t intend the latter. It was the product of an apparent mis-read. He looked to play the putt pretty straight, or perhaps even on the inside left. But the ball broke left ever-so-slightly, which is why, when the ball first enters the hole, it does so on the very left edge.

And after the putt, he signaled as much to his caddie, that it broke to his left.

So let this be a lesson to never take a putt, no matter how short, for granted. Pay attention to the details, and when you do get away with one like Rickie did here, take note.