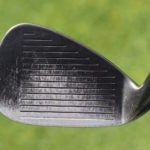 While Michael Phelps' irons show signs of wear and tear, the grooves don't appear compromised, so he may be in the clear for now.

It would be quite the expensive endeavor to buy new clubs every time new (and “better”) equipment hits the market. You’d also only see marginal gains from your equipment year-over-year, so it may not be the best use of your money. On the flipside, however, if you let years and decades pass without upgrading equipment, you’re undoubtedly missing out on improved technology that could help your scores.

So, when is the right time to switch into new equipment?

The absolute best way to know for sure is to consult with a professional fitting expert to evaluate your current setup. I can’t recommend this enough. Still, I understand that many golfers won’t go through the complete process, for varying reasons, which is why, for this article, I’ve enlisted the help of David McKee, the production manger at GOLF.com’s sister company True Spec Golf. He’s a longtime expert in the field of club building and fitting. Together, we’ve compiled five telltale signs that it’s time for an equipment upgrade.

Note: Some performance issues can be fixed by changing out shafts for something that fits better, or by using lead tape to shift CG (center of gravity). This article is for clubs that are beyond simple fixes. Whether it’s with your driver or irons, having too much spin on your golf ball during flight can have negative effects. Launching the ball high can be helpful, but too much spin will make the ball balloon in the air, losing distance and control in the wind.

For those reasons, most new golf equipment technology is designed to increase height but lower spin. So, if you’re playing with a driver from the mid-2010s or earlier, or irons from last decade, it’s likely that you’re costing yourself distance and control.

If, under relatively dry course conditions, your drives hit the fairway and stop quickly without rolling out, your ball is probably spinning too much. Also, if your irons seem to float too much in the air and you’re constantly coming up short of your expected distances, too much spin could be the culprit. In these cases, newer low-spin technologies could be very helpful.

Do your drives barely get off the ground, with more of a line-drive flight than a towering moon shot? Are your irons hitting the greens and bounding over the back?

If this is the case, you’re giving up distance and distance control. Penetrating ball flights can be helpful in super windy conditions, but hitting the ball too low can be detrimental in the long run.

Every year, new technologies hit the market that help golfers hit the ball higher. If you’re a golfer who hits the ball too low, and you’re playing with older golf equipment, it’s likely that new equipment can be a game changer. By launching the ball higher into the air, you could gain distance off the tee and control with your irons.

3. Your playing partners are passing you by

If you’ve been playing with a regular foursome for years and you’ve noticed they recently started passing you by in distance, there could be a reason for that.

Year-over-year, distance increases in new equipment are generally minimal. If you bought a driver in 2019, the 2020 model may only be 1-2 yards longer. But, if you have a driver from 2004, then the 2020 model could be 20+ yards longer. From a common sense standpoint, just think about all those years gone by of minimal improvements.

The same goes for irons. Modern iron technology has improved drastically just over the last 5 years. Things like perimeter weighting and hollow bodies have made irons both longer and more forgiving.

If your buddy recently bought a new driver and has all the sudden started outdriving you, maybe ask to try his driver next time you’re at the range together. Hit your older technology against his new technology and see the difference. Don’t be surprised if the new technology helps you pick up big distance.

Do your iron divots look like you tried digging your way to the Earth’s core? Generally speaking, iron divots should resemble the size of dollar bills. Nice and thin pieces of grass should fly through the air after impact, not large bricks of sod.

If you’re taking huge divots, then it’s likely you’re playing irons or wedges that don’t have enough bounce on the sole. You can certainly learn to shallow the club out and get less steep to address the issue, but better-fit golf equipment can be a quick fix.

In the modern age of golf equipment, companies provide a number of different iron styles to appease different swings. If you’re a digger, seek out iron styles that have wide soles and high degrees of bounce. This will keep the leading edge from digging too much, and give you more control of your golf ball.

5. Wear and tear is beyond repair

If the crown of your driver is literred with dents, or the face of your irons/wedges have no grooves because of so much wear, then it’s time for new equipment.

McKee says that when irons and wedges lose their grooves, the ball will lose spin going into the green. So, if you’ve had a sand wedge for years, and you’ve noticed that the ball is bouncing and rolling out instead of bouncing and spinning, you probably need a new wedge.