Does your geographical location affect your putt’s break? 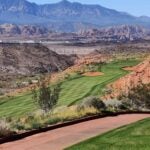 Do the surrounding mountains and valleys have an effect on putts at this course in Hurricane, Utah?

Every golfer has heard it before: “That putt breaks toward the creek.” “Make sure you take the affect of the valley into account on that read.” “When you’re playing in the California desert, everything breaks toward Indio!”

Golfers have long believed that the geographical location of where they’re playing has an affect on the break of their putts. But does it really?

On this week’s episode of Off Course with Claude Harmon, short-game guru John Graham, who counts Justin Thomas and Cameron Champ as clients, set the record straight.

“It doesn’t have to be factually [true] to be beneficial to the player,” Graham said of the belief. “The player is dealing with the environment as they see it. The fact that they have a difficult time because the designer is paid lots and lots of money to make it hard to see well, because they can’t see it well and they have this ability to say well, I can’t see this breaking to the left but I know that I’ve seen it do it before.

“And the valley is over there, and downtown Phoenix is over there, and Rae’s Creek is over there, and whatever landmark they want to use is there, to give them that extra little bit of information that, ah, I really can’t see this doing this today, but I saw it happen last time, I’m gonna play a little bit for that little valley effect, or that downtown or Rae’s Creek,” he continued. “I think it’s specific optical challenges that the designer has used to trick golfers into not being able to see what’s real.”

So, does Graham believe in any of that? Harmon wondered.

“Those areas don’t pull the golf ball,” Graham said. “[But] there’s no question those areas can help a player make a better choice, because they can’t see it on their own. So, the math side of me knows that there’s no additional gravity in downtown Phoenix or in the valley or Rae’s Creek. However, the art piece of me knows that if a golfer can’t see it, and that information helps them make a better choice, then it’s valuable, and it can’t be discarded in that way. The fact that it’s not actually doing it, but it’s helping the golfer make a better choice, that’s perfectly valid in my view. So I think it can both be non-factual and beneficial at the same time.”

For more from Graham, including where the putting yips come from, and the simple phrase that made Tiger Woods such a great putter, check out the full interview below.