This is the worst warm-up mistake golfers make, says one of the best putters ever 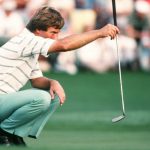 Don't you dare hit short putts before you lag a few.

Earlier this week, I took a look at the games of some of the best power players in Masters history. Today, I’m continuing on the same theme but shifting the focus to the green. What can we learn from the best putter in Masters history, otherwise known as Ben Crenshaw?

For golf fans who weren’t around in the 1980s, it’s easy to forget how much of a Masters stalwart Ben Crenshaw was. He was arguably the best Masters player throughout the entirety of the 1980s, with a first, second, third, two fourths, a sixth and an eighth place finish in 10 years.

Lurking on YouTube is a fantastic old video from Crenshaw’s 1986 “The Art of Putting,” which you can watch here or down below. It’s loaded with great tips and, above all else, a singular message about putting:

“I don’t think putting can be reduced to lines and angles,” Crenshaw says. “There is no magic formula … it’s a matter of touch.”

But while Crenshaw doesn’t prescribe many rules throughout the 39 minute video, he couldn’t resist on one occasion. Talking about warming up, he outlined a mistake that he says golfers make all the time — I know I do.

In the video, Crenshaw says that golfers often don’t leave themselves enough time for a proper warmup, which leads them to make a simple mistake:

“Many weekend golfers warm up for a round by dropping a few balls four feet or so from the hole, hitting a few short putts and racing off to the first tee,” he says. “In my opinion, that’s counterproductive. That’s the worst possible way you can do to achieve that smooth stroke that you’re looking for.”

Why? Crenshaw explains that if you feel rushed, your stroke will, too. That will hurt your feel, which will cause you to miss putts, which will wreck your confidence.

“Don’t, and I repeat, don’t start with those short putts. When you miss these short putts, and you often will because you’re not properly warmed up, it’ll hurt your confidence.”

DO start with longer putts

Instead, Crenshaw says to make sure the first putts you hit are longer putts. Something where you aren’t focusing on making the putt, but just making a smooth stroke and finding the right speed.

“Start out with longer putts, in the 20 to 25 foot range. Don’t worry so much about your line, just focus on making a good smooth stroke, work on developing your feel.

In all Crenshaw says you should spend about 15 to 20 minutes on the practice putting green. Ten of those minutes should be reserved for short putts, but only after you hit lots of longer lag putts.

Want a truer roll on the greens? Get a putter fitting from the experts at our sister company, True Spec Golf.