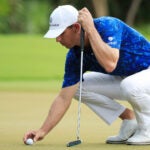 Billy Horschel lines up a putt during the Mayakoba Golf Classic in December.

“Making things really difficult on himself,” Golf Channel analyst Jim “Bones” Mackay said, “but, once again, he rises to the occasion and makes it right in the center.”

Mackay was describing Horschel’s putt on 16. He could very well have been describing the ones on the putting green. How does Horschel rise to the occasion? How does he make it right in the center? By making things really difficult on himself.

Practice what you putt.

“If you see me at a tournament on a weekly basis, we do a lot of putting drills and we spend a lot of time inside 10 feet,” Horschel said when asked his mental approach on his par putts. “It’s sort of a competition that I have to make X amount of putts from certain ranges, and if I don’t do it, I have to redo the drill and I don’t leave until the drill is done. Sometimes all the drills can be done in 30, 35 minutes, and, other times, it takes 2½ hours.

“When I get on the golf course it just allows me to look back on all the prep and practice and sort of rely on that more than think about what this putt means or that par putt.”

“I think I’ve been rolling it really well for a while and sometimes just don’t make a lot of putts,” Horschel said. “I think the thing that’s been crucial for me is getting my setup a little more comfortable. I think going to this putter last year in the two Columbus events, Workday and Memorial, has allowed me in my setup to get into it more routinely or most consistently, which is crucial. I feel comfortable over the ball and feel like I’m going to roll it on my line and hit it with the speed I want.

“I feel like I’ve been rolling it well now and sometimes you burn a lot of edges and they don’t want to go in.”