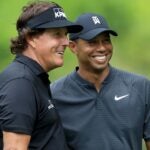 Tiger Woods and Phil Mickelson have been the two best golfers of the last 30 years.

There is little argument when it comes to who the two best golfers of the past 30 years have been. No. 1, of course, is Tiger Woods. And No. 2, Phil Mickelson. Between the two there have been 126 PGA Tour wins, 20 major championships and countless moments of immeasurable greatness.

But while Woods and Mickelson are the undisputed 1-2, there is still a wide gap between the two rivals. Woods has gotten the better of Mickelson more than the other way around, and there is no argument that Lefty has played second fiddle for much of his career. In fact, without having to battle Woods throughout the prime of his dominant career, Mickelson’s win total would likely be much higher and his place in golf history more revered.

With Mickelson having to compete with such a historically dominant figure, it would make sense for him to be bitter at everything Woods kept him from during his career. But it’s actually been quite the contrary, with Mickelson praising Woods for pushing him over the years.

“I think that Tiger pushed me to start training a little bit more, which has helped me elongate my career,” Mickelson told reporters at the Zozo Championship. “He’s pushed me to swing harder.”

In the era of bomb and gouge, swinging hard is all the rage. Bryson DeChambeau might have taken the pursuit of distance to the absolute limits, but Woods started this trend over 20 years ago.

Mickelson’s only regret is that he didn’t take his fitness more seriously earlier in his career. Although the slimmed-down, bomb-chasing version of Lefty has allowed him to stay competitive into his 50s, it’s impossible not to wonder what his career arch would have looked like if he were a fitness junkie his entire career.

But even if he had been more fitness-oriented, Mickelson assured the media that he wouldn’t have chased distance the way DeChambeau has. And even if Mickelson wanted to, he wouldn’t have been able to do it like players do today — technology simply didn’t allow it.

“During the prime of my career we really didn’t have launch monitors, so we weren’t able to dial a lot of this stuff in,” he said. “A lot of this was by feel and seeing the ball and using vision to see, oh, it’s spinning too much, it’s floating. We didn’t have the precision to dial things in the way we do now.”

For now, Mickelson has his focus dead set on the Masters in just over two weeks. Every training session and shot has Augusta lingering at the back of his mind. A win there would make him the oldest winner of the event and push his total to four green jackets in his career — just one behind his old pal Tiger.