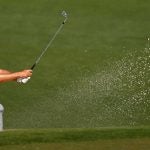 What changed? Turns out that somewhere along the line, he got a second-hand piece of advice from a former Masters champ which altered his entire approach for the better.

“I actually didn’t get it directly,” he said on Tuesday, ahead of the event. “It was indirectly from Phil Mickelson.”

So, what was the advice?

Every hole has a bail-out zone

A bail-out zone in golf is exactly that: A place where players can hit their ball, intentionally or otherwise, if they’re too scared to aim for the pin. It’s something you should think about the next time you’re on the course, and it was the essence of the advice Webb heard second-hand from Phil.

“He said ‘every hole here gives you a bail-out. Every hole there’s a safe side of the hole, where that’s not typically thought of at Augusta.’ Everyone thinks of Augusta as, you miss the green, you’re going to have a really tough chip,” Simpson says.

Knowing the right spot to miss is something Augusta legends seem to talk about often, and while Webb didn’t dive into specifics, he did mention the 9th hole as a notable example.

“If you know where to miss it, for example, on No. 9, anywhere left to a left pin is pretty much dead, but if you miss it right of the green, and you got 20 yards over there right of the green…it’s an easy up-and-down,” he says.

“When I took that mentality a few years ago, it really changed the way my bad rounds started becoming even par, one-over, and my good rounds, I was starting to shoot in the 60s more just because I was playing smarter and missing it where I needed to,” he says.

Knowing where the bail-out zones are is the tricky part, of course, but knowing they’re there is step one. Webb seems to be getting better at it each year, and perhaps 2021 will the year he collects a green jacket to show for it.