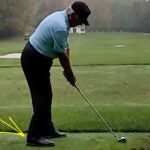 Dropping your trail foot back behind you can help you turn more.

Lee Trevino still throws darts. At 81 years old, the darts may not fly as far as they used to, but they still fly straight and pure.

We got a front row seat for it at the Berenberg Invitational, at GlenArbor GC, in Bedford Hills, N.Y., earlier this week. The six-time major winner sent ball after ball down the range with the not a hint of movement in either direction.

And then after the stripe show, he took a few minutes to help us with our ball striking, including one tweak that Trevino has made to his setup just recently: dropping his trail foot back behind him.

You can see him do it below. By the time he hits the ball, it looks like his feet are pointing to the right of his intended target, or closed.

Why is Trevino intentionally trying to do this?

“Us old guys, we need help turning,” Trevino says. “If I drop my right foot back, it gets my leg out of the way so I can turn more….I don’t hit it that far anymore, but when I get that hip back, it helps.”

It also, as he went on to say, helps prevent you from coming over the top.

“Most people come over [the top of] the ball, and they do that because their right hip is in the way,” he says. “Moving the foot back gets the hip out of the way, and helps you come from the inside.”

By giving his body more room to turn, it helps preserve some of Trevino’s power and sets the rest of his golf swing up for success, as you can hear him describe in his own words below: