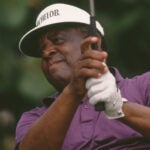 The golf world mourned the loss of a man without equal this week. Lee Elder, the first Black man to play the Masters, where he later became an honorary starter for the event, and then the Ryder Cup, passed away on Sunday night at the age of 87.

Losing such an iconic, trailblazing figure is a bitter blow for golf fans. But the aftermath of such sad news isn’t simply a time for reflection on what we’ve lost, but for celebration of what we had.

Elder was above all else, a golfer, one utterly committed to his craft. He was the kind of self-taught genius whose game was a perfect reflection of his one-of-a-kind upbringing: An orphan who learned golf from working various jobs around the game, who didn’t play a full round until he was 16 years old, before hardening his game in high-pressure money games.

Throughout his life, Elder’s advice on how to play wasn’t theoretical, but pragmatic. The kind of advice that doesn’t just sound great, but is great, because it actually works.

“The best way to learn golf is to choose one department of the game and get good at it before branching out,” he told Golf Digest in his revered My Shot Interview. “It can be any part — I suggest pitching with a sand wedge — but don’t try to swallow the whole game at once. If you try to learn driving, sand play, fairway woods and putting at the same time, the game will eat you up. You’ll get frustrated and might quit. Build up confidence in that one area, and then let it spread out to the other parts.”

And it was this kind of know-how-to-make-it-work mindset that led Elder to arguably the biggest breakthrough in his game.

There aren’t many things almost all golfers do, but almost every golfer on earth holds the golf club in one of three ways: With an overlap grip, an interlock, or a 10-finger baseball grip. Lee Elder, like so many things in his extraordinary life, broke the mold: He used a unique double-overlap grip.

It was the product of necessity. Elder started his golf career with a conventional overlap grip, but was struggling to find success with it.

Elder’s preferred shot shape was a left-to-right fade — which would turn into a double-cross when his right hand would take over and shut down the clubface. As he said above, removing one extra finger of his occasionally overactive hand allowed his leading arm to play the key role in his golf swing uninterrupted. That prevented the clubface from turning over, which helped him perfect the consistent fade he used for his four PGA Tour victories.

It was the kind of simple, effective, common sense advice that wasn’t the product of privilege, but of a man who knew how to use the game to make ends meet. Elder did far more than that, of course. He wrote his name into golf’s history books, and will live on forever as a true icon of the sport.