2 pros’ weekend performances show the importance of never giving up 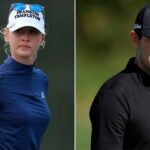 Despite some early struggles last week, Jessica Korda and Patrick Cantlay were able to regroup and post top finishes with stellar weekend performances.

Sometimes on the golf course, you won’t have your best stuff — it’s just a fact. You’ll go to the course and something will feel off, making it difficult to perform at your peak. It happens to everyone, even the best golfers in the world. But grinding through those tough stretches are just as important as playing well when you do have your top game.

We saw two prime examples of this last weekend in the professional ranks. One came on the PGA Tour, while the other occurred on the LPGA Tour.

On the PGA Tour, we saw Patrick Cantlay play an extraordinary weekend of golf, carding rounds of 65 and 61 to finish runner-up at the American Express. This flurry of birdies on the weekend came after he played well short of his potential over the first 36 holes.

Cantlay shot 69-71 prior to the weekend to make the cut on the number. But once he had a spot reserved on the weekend, he made a furious charge that ultimately came up just short.

“I thought that if I played two absolutely fantastic rounds on the weekend, I would have a chance,” Cantlay said. “And I did, I played really well.”

A lot of players — especially in the amateur ranks — might have given up hope when being so far behind after two rounds. But Cantlay showed that you’re never really out of a tournament with 36 holes left to play. His grind through the mediocre first two rounds set up a chance for the title come Sunday.

The winner on the LPGA Tour showed similar grit. Jessica Korda played solid golf over the first two rounds of the Diamond Resorts Tournament of Champions, but still found herself five off the pace of Danielle Kang.

When a player the caliber of Kang is playing near her best and you find yourself five shots back, it would be easy to tip your cap and pack it in. Korda had no such plans. Instead, she went out on Saturday and shot a 60(!), just the fifth in LPGA Tour history, closing the gap between her and Kang.

In the final round she finally tracked down Kang to force a playoff, winning with a long birdie putt on the first extra hole. It was all set up by hanging in there early in the tournament when she was just trying to keep the leaders in sight.

So remember, no matter how far behind you find yourself, or how bad you’re playing, try to grind through it. If you can give yourself a chance, you will be in a much better position when you rediscover your form.

Sometimes that will mean playing more conservatively, and others it will mean just staying mentally engaged. But no matter what, just remember what Cantlay and Korda did this weekend, and never give up.