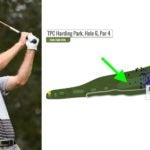 Jeff Hart is a 60-year-old PGA Professional who doubles as the oldest player in the field this week — qualifying via a points system that was put into place when the PGA’s annual professional championship was canceled. For recreational golfers watching from home, he probably provides the best look we’re ever going to get at someone like the rest of us playing a difficult, major championship course.

Granted, Hart is better at golf that most of us can ever dream of, but his physical makeup is not that of a stereotypical professional athlete. He stands 5’9″ and weighs in at just 149 pounds. His driving distance on the round measured just 240 yards overall (253 yards on his two longest measured drives), yet still managed to play his first five holes in one-under. He shot a seven-over 77 in all, a round he was proud with.

After his round, I asked him to describe, for golfers like the rests of us, what’s it like playing TPC Harding Park in PGA Championship conditions.

“It’s like pitching in the in the major leagues with a 60-mile-an-hour fastball; they’re teeing off on you, basically,” he said.

When he dug into the details, he describes a course that sounds truly impossible for the rest of us, which makes it all the more amazing watching pros cruise through with so many birdies.

“Seven or eight par-4s that I can’t reach in two, so par effectively for me is about 78 or 79 or 80 if I were realistic about it,” Hart said. “I’m trying to roll the ball up. I think I hit five or six drivers off the fairway just trying to roll them up on these long par-4s. I played with Brian Harmon and C.T. Pan, and they’re 50 yards longer than I am, and they’re probably short for a Tour player, and they’re coming in with mid-irons.

My favorite swing-thought of all-time came from Paula Creamer

Sick of losing golf balls? Here are 5 tips to never lose one again