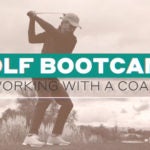 In Episode 3 of Erik Anders Lang’s Golf Bootcamp, he and GOLF Top 100 Teacher Dana Dahlquist work on refining his golf swing. But what exactly does that mean?

First, Erik and Dahlquist spend time on the tee working on a driver adjustment. Dahlquist explains that unless your swing speed is fast enough for the PGA tour (hint: it’s likely not), you’re going to want to “hit up” on your driver. To do this, the ball should be played more forward in your stance. When you hit up on a driver, the direction of your swing moves to the left, and this means the path also moves toward the left. Therefore, if you want to hit up on the ball, you also need to adjust your aim.

Dahlquist noticed that Erik’s swing direction was going more to the right on the radar, which means he can negate that tendency simply by moving the ball more forward in his stance. By moving Erik’s back foot back just a fraction, he balances out the ball flight direction to produce a straight shot. This simple ball positioning and weight change allowed Erik to hit some of the straightest drives he’s ever hit.

Next, the two head to the fairway to work on approach shots and swing thoughts. Dahlquist and Erik talk through his pre-shot process, which starts with aiming the club face. He lines up his feet parallel to his target, which allows him to start the ball right, and bring it back in towards the target.

The shorter the club gets, the more you need to hit down on the ball, which inherently causes an in-to-out swing path. To offset that, you need to aim your feet a little bit left without moving the face of the club.

Erik didn’t make any changes his swing at all this episode, he only refined his alignment. His swing is the same for all the clubs in the bag, but the alignment changes he made produced better and straighter shots.

In Episode 4, Erik and Dahlquist talk about course management and learning to play your miss to your advantage. Erik starts by playing a few holes while Dahlquist analyzes his shot shapes, decision-making and other habits out on the course.

As Erik sets up for each shot, he and Dahlquist talk through where to aim, what club to pull and why. They look for the big spots on the green, areas away from trouble in the fairway and set up to hit those spots with a miss. For example, when the pin is on the right side of the green, Erik aims for the middle of the green and plays a draw. Worst case, he has an easy chip from the left rough, best case, he’s looking at a birdie putt.

Ultimately they learn that with a few more rounds to further refine his new technique and a little clean up around the greens, Erik’s not far off from being a scratch player. If you follow these tips, maybe you’re not either!

8 things I'm doing to keep my game sharp this offseason

How to use your bank card to improve your putting at home — for free!