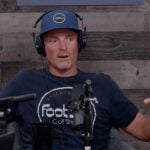 Mark Blackburn breaks down how golfers are beginning to physically evolve.

It’s fair to say that GOLF Top 100 Teacher Mark Blackburn — founder and CEO of the Blackburn Golf Academy and muse to many PGA tour professionals — may know a thing or two about what the future holds for the sport. With his credentials in mind, Blackburn dove into his theory on golf’s evolution on this week’s edition of GOLF’s Subpar.

Blackburn began his analysis on how golf players will continue to evolve and physically advance by drawing parallels to progression in other sports — namely, track and field.

“I just think athletes evolve,” Blackburn said, responding to co-host Colt Knost’s prompt about if this upcoming, potential change is good for the sport. “If you look at Roger Bannister, and the four-minute mile, and then you look at what people do now, if you look at Usain Bolt … It’s evolution.”

Blackburn also discussed the fascinating intersection between coaches — whose job it is to develop and condition their athletes — and the golfers who are being coached and subsequently competing.

One player Blackburn lauded as being a “full-on athlete?” Recent Northern Trust winner and World No. 1 Dustin Johnson.

“When golfers look like [Johnson] — and I they are going to, from a younger age,” Blackburn said. “And they look more like baseball players … the 200 mile-an-hour ball speed thing will not be anything that’s un-normal. I think it’s just a matter of time.”

While not mentioned on the podcast, another prime example of one of the PGA Tour’s finest professionals embracing analytics and physical evolution is Bryson DeChambeau, whose weight gain and subsequent mind-blowing driving numbers have been well documented this season.

However, while some may be tentative to leave the old, more antiquated fixtures of the game behind, Blackburn believes that all pros should simply be adopting this new style.

“I just think everyone should get on with it,” Blackburn said.

Check out more from the podcast below.