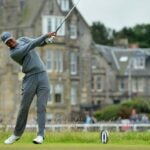 When Tiger Woods hits his famed stinger, it’s power and poetry in motion. The compression, the low launch, the casually rising ball flight — awesome, to say the least. Most everyone watches in jealousy. Everyone but Zac Radford.

You’re excused for not recognizing the name, but Radford has become Mr. Stinger in golfy social-media circles. Years ago, the mini-tour pro was battling a faulty driver swing so he spent hours and hours on the range perfecting a low-launching shot that he could trust in crunch time. “I’d spend hours on the range just trying to hit [shots] as low as I could,” he recalls.

It may have taken him a full 12 months of toiling at Nashville Golf and Athletic Club, but Radford finally developed his stinger. The result is so consistent and visually pleasing that Tiger himself might even cast an envious eye. “It’s at the point,” Radford says, “where I just feel it and swing.” It’s also blossomed to where Mr. Stinger has more than 100,000 followers on Instagram (@realzacradford) and 50,000 subscribers on YouTube.

Back on the course, in the heat of competition, Radford’s life has continued on the mini-tours, with that stinger one of his best assets. Let that be a lesson for all golfers: When your driver isn’t working, something else might. The process has convinced him that you can develop a stinger, too.

Here are his five steps. Most players who try to hit a stinger immediately grab the longest iron in their bag. That’s a mistake. Radford hits most of his stingers with a 5-iron. Why? The descending blow required for a stinger alters the angle of the clubface at impact. In effect, you’re manually changing a 5-iron to a 4 or even a 3. Once you get comfortable hitting 5-iron stingers, you have permission to grab your 4 for even lower launch.

2. Play the ball mid-forward in your stance

Anyone who has spent time punching out from under trees knows that positioning the ball in the back of your stance and punching down on it usually gets you back to safety. The stinger is different. In order to take a full lash at the ball—to put everything you’ve got into the shot—you must play the ball in the middle of your stance, or even an inch or two forward of center. This will help minimize the ball’s spin rate off the clubface and as it shoots down the fairway. The result: more rollout once it hits the turf.

3. Lead with your hands

In order for the clubhead to “push” the ball straight with minimal launch, Radford suggests “pulling” the club, so that the clubhead is behind your hands as you enter the impact zone. (At impact, Radford’s hands are often even with his forward foot!) This takes some getting used to, but it’s essential. “If you can get comfortable making contact with the clubhead well behind your hands, you’ve got a great shot at perfecting the stinger,” he says.

One of the biggest reasons even good players fail to develop a reliable stinger is that they tense up. It’s an abnormal shot, so the tendency is to think about it more, swing harder and grip the handle tighter than normal. “I’m always thinking noodle arms,” Radford says. “I want zero tension in my forearms through impact.” It may seem counterintuitive, but tensing up actually slows down your swing and limits speed through the ball. It will hurt your ability to deliver the clubhead to where it started, too.

Mid-downswing, Radford pulls his hands slightly to the left so that they exit in that direction after impact. This produces two critical stinger keys: 1) creating a descending blow (Zac’s angle of attack is as steep as –9 degrees), and 2) keeping the clubhead as straight as possible through impact. The lucky thing is that the move fits his natural motion. If your backswing is up and to the right (like most rec golfers’), you’re in luck, too — it’s perfect for the stinger. Good luck!