How to convert your friends into golfers, according to new study 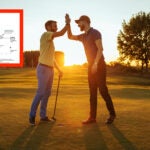 Plenty of people try golf — but most beginners don't stick with it.

Since May 2020, more people have been playing golf. Tee sheets got packed. Beginner golf sets flew off shelves. Eye-popping year-over-year participation numbers harkened back to the Tiger Woods boom.

But will they keep playing?

Plenty of “Covid golfers” who returned to the game or picked it up for the first time are still playing all these months later. But a new study from the National Golf Foundation sheds some interesting light on what makes beginner golfers likely to stick around.

The NGF identified just over 1000 people who had “taken up golf as an adult over the past 10 years.” They asked them a series of questions about their connection to golf, their experience getting started, whether they’re still playing and how often they’re doing so.

So how many beginners stick with the game? Just 27%, according to the study. The bad news is that’s a surprisingly low number, basically just enough golfers to offset those who have retired from the game or died in the meantime. The good news is the study includes some very specific learnings. Whether someone will quit or stick with it is fairly predictable based on their early experiences.

These learnings will help you if you’re a golf coach, a membership director or a general manager trying to build up your customer base. But they’ll also help if you’re just looking to get your buddy, spouse or child into the game. Here’s what we learned.

Fun, fun, fun. People talk constantly about making golf more fun but obviously struggle to actually make it happen for everyone. Still, the data suggests every golf stakeholder should be doubling down on their efforts to jack up the fun. Beginners who reported a “high” level of fun during their introduction were converted into golfers at a 51% rate, nearly double that of the group average.

Sometimes it’s difficult to remember from inside the sport, but from the outside nearly everything about the game is intimidating. It’s difficult. There are lots of rules. There’s a confusing, variable dress code. What do you even do if you want to get started? If your beginner golfer feels comfortable, that’s a big step in the right direction.

One of the most shocking numbers here is that 44% of golfers who were contacted after their introduction to the game became “converted” golfers, much higher than that 27% average. Let golfers know you enjoyed having them and that they’re welcome back.

One of the highest numbers from the study comes from those who participated in a “fun competitive event” like a scramble. This makes sense because scrambles are an absolute blast and they also allow beginners to contribute to the cause without the pressure of every single shot counting. Golf lends itself to competition. It’s a game! Lean into that in a low-pressure way and your beginner golfers are going to stick around.

Golfers are also much more likely to stick with the game if they get some instruction. Those who participated in a “special adult beginner program” showed an uptick in retention. Golf is hard. If you can get a baseline of instruction to help make it a little more accessible, that’s a great start.

WHAT NOT TO DO

This gets back to the idea of comfort. If you’re with new people in a new setting playing a new game, that can be uncomfortable. Nearly half of all beginners reported the discomfort of playing with new people, and just 16% of that group were converted. Make your golf beginning a fun, safe space.

A majority of the 1000-person group (57%) received no instruction as an adult. But golf is difficult, and it’s far more fun if you go in with some tools in your toolbox. Before you start, it might be more fun if you get a lesson! Get a lesson with your friend! Enter a group lesson and figure it out together.

And if you’re already a “converted” golfer, remember to be nice to the people around you who might not be there yet. Be patient. You might just be looking at the future of the game.

You can read more specifics about the study at the NGF site here.