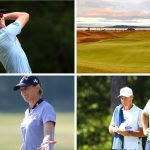 There's plenty of intrigue in the air heading to U.S. Open week.

Welcome to the Monday Finish! This is where we’ll tally the scores for the week that was and tee you up for the week to come. This week that means Garrick Higgo’s backdoor victory, the PGA Tour’s new longest driver and the U.S. Open week ahead.

Something you should know.

My introduction to the world of golf writing came from the back of a station wagon. That’s where I lived after finishing high school; I spent a year trekking the country in a Subaru Outback, exploring faraway places with the overarching goal of playing a round of golf in every state in the lower 48. Along the way I kept a blog, which I would update from public libraries or, if I could catch a stray wifi signal, from my converted backseat/bed. That blog led to a book, 18 in America. Eventually I wound up writing for the wonderful website and publication that you’re currently reading.

Why bring this up now? Well, because this week I’m getting back to my roots. On Sunday afternoon I began the trek from my apartment in Seattle down the coast to Torrey Pines for this week’s U.S. Open. I’m staying in a camper van. I’ll be blogging from the back seat. That is, in fact, what I’m doing right now.

The trip began with a visit to Chambers Bay, the 2015 U.S. Open host course. It was the perfect place to begin the journey, not just because it’s arguably the best course in Washington but because like Torrey Pines, it’s a municipal course that doubles as a major venue.

It’s been a decade since I’ve slept in a car. This time around, it seems far more luxurious. There’s a proper mattress. There’s a sink. A toilet. Actual storage space. One thing remains the same: the freedom to finish up the night’s drive, roll into the backseat and go from behind the wheel to under the covers in mere minutes. Dave and Matt Vans is a bang-for-your-buck camper van company that outfits vehicles like this for a living. They know what they’re doing.

It’s going to be a great week.

Garrick Higgo won the inaugural Palmetto Championship at Congaree when the rest of the field seemed to fade in unison at the end of Sunday’s round. That left Higgo, a 22-year-old South African making his first non-major PGA Tour start, alone at the top. Get ’em Garrick!

Matilda Castren won the LPGA’s Mediheal Championship at Lake Merced. The rookie’s victory was groundbreaking on multiple levels; it was her first win, for one thing, and it was also the first time in LPGA history that a Finnish golfer has won.

Jonathan Caldwell had an emotional victory at the inaugural Scandinavian Mixed, where a combined field of men and women vied for the title and Caldwell emerged with his first European Tour crown. The trophy has been a long time coming; Caldwell first qualified for the Euro Tour in 2009. But then he lost his card and it took him a decade to get back. Now he’s a well-earned winner.

On the Korn Ferry Tour, Mito Pereira earned a battlefield promotion with his third victory of the season. Pereira, a 26-year-old Chilean, shot 27 under for a four-shot win at the BMW Charity Pro-Am. Pereira won last week’s Rex Hospital Open, too. His three-win promotion is the first since Wesley Bryan matched that feat in 2016.

Chesson Hadley held a two-stroke Palmetto lead on the 16th tee before a bogey-bogey-bogey finish that was tough to watch from any vantage point.

“It sucks, right?” said Hadley, who shot 4-over 75. “I can only imagine what it looked like on TV because it looked freaking awful from my view.”

Other notable non-winners at the PGA Tour event: Tyrrell Hatton, who entered the week among the favorites, Bo Van Pelt, who finished T2 despite zero top-10s since 2016, and Dustin Johnson, who got to 11 under with three to play before a horrific triple-bogey 7 at No. 16. He finished at eight under, three shots out of a playoff.

Min Lee held the 54-hole lead at Lake Merced but was outdueled down the stretch. Her closing 69 was two shots shy of a playoff but also four shots clear of Hannah Green in third. Lexi Thompson finished T34 a week after getting oh-so-close at the U.S. Women’s Open.

In Sweden, Adrian Otaegui was runner-up while the top female finisher was Alice Hewson in third. The Scandavian Mixed was an awesome format and a simple, clever way to get men and women competing on the same golf course the same week in the same tournament. Let’s hope it continues.

Hunter Mahan didn’t have a terribly good week at Congaree. In fact, he didn’t even finish two rounds; Mahan was among the eye-popping eight pros to WD before the cut was made on Friday — Congaree is not for the faint of heart. But man, did Mahan look magnificent for all 78 of his opening-round shots.

Meanwhile, Brooks Koepka began the week with a villainous goatee but emerged for Friday’s round clean-shaven. What do we make of the transformation? Koepka missed the cut immediately thereafter, but maybe this is part of his major championship prep. At this point, it’s hard to second-guess whatever Koepka does to get ready for the biggest events in the game.

“These weeks before the majors, I start thinking about next week instead of where I’m at,” Koepka said, stressing that the tournament reps in South Carolina were more important than the result. “It’s not an excuse, but it just needs to be better. I need to be where I’m at currently, even more present in this tournament than thinking about next week.”

The explosion of a Ping driver.

Just how far does the 21-year-old Nienaber hit it? Really far. Sounds-different far. Farther-than-Bryson-DeChambeau far. On the two measured holes, Nienaber averaged 361.4 yards for the week. On all measured holes he averaged 337.4. Both led the field. He hit 200 mph ball speed, the first time that barrier has been broken on Tour this season. And Nienaber isn’t some long-drive macho man; he’s 6’2″ and slender, and doesn’t even look like he’s swinging particularly hard to create this ridiculous speed. He just hits the absolute hell out of the golf ball.

Good news: We get to see more Nienaber at this week’s U.S. Open.

On Saturday, Tyrrell Hatton didn’t make a bogey. Nor did he make a birdie. But he shot 67 nonetheless. How? Three eagles, one double-bogey and fourteen pars.

Most incredibly, two of those eagles came on back-to-back holes — and neither was on a par 5. Hatton’s eagle-eagle stretch at the par-4 15th and 16th won’t soon be replicated.

All eyes are on Torrey Pines. Jon Rahm is the favorite. Brooks Koepka and Bryson DeChambeau will command plenty of eyeballs. But where should you focus your attention for maximum intrigue?

1. Phil Mickelson. I’m not crazy enough to think Mickelson likely to win back-to-back majors — or even contend — but it should be fascinating to see Lefty playing in his own backyard coming off an impossible victory at Kiawah Island.

2. Xander Schauffele. Another hometowner. A major championship almost-winner. A guy I can’t stop picking to win majors, only to see him come up just shy. Is this his week?

3. Jordan Spieth. You could still make the case that nobody on the PGA Tour is playing better golf in the last few months than Spieth. Does his game match up with the beefy demands of Torrey Pines’ South Course?

I’ll be watching from the roving Monday Finish offices, which this week means the back of a camper van. I’ll update you on progress on Twitter, Instagram and, of course, on the pages of GOLF.com.

We’ll see you all week!