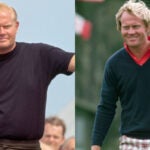 When Jack Nicklaus decided it was time to shed some weight, he adopted a new diet and a routine of running on the golf course.

The 1969 Ryder Cup was a turning point for Jack Nicklaus.

A rookie on the U.S. team, Jack played 18 holes on Thursday and Friday, then 36 holes of singles on Saturday (as was the format back then). He was just 29 years-old, but admitted that was “the first time in my life I got tired.”

Always a strong and burly athlete, Jack decided after that it was time to trim some of the fat. He adopted the Weight Watchers diet of the time, along with a unique fitness regimen that earned a spot in Greg Presto’s newly-released book: “The Workout Bucket List” (which you can buy for yourself right here).

To work up a sweat, the 18-time major champ would grab “four or five clubs” — usually a driver, two irons, and a putter — and run around the course during the offseason.

We know it today as Speedgolf. Eighteen holes will equate to about five miles, and take about an hour. It quickly helped Jack lose more than 20 pounds and increased his on-course stamina along the way, rendering his tiredness issues a thing of the past.