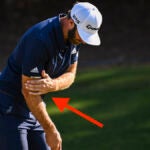 Dustin Johnson has been on a tear recently. Since shooting 80-80 and 78 in back-to-back weeks at the Memorial and 3M, he’s shot just two rounds in the 70s en-route to T12, T2, first, second, and first place finishes — and capped it off with a $15 million check to show for it.

DJ’s ball-striking has been predictably solid throughout his stretch — he ended the season 9th in SG: Tee-to-Green — but it’s been his putting that has set him apart. Since losing more than 3.1 strokes on the green during his 80-80 showing at the Memorial, DJ steadily improved and maintained that performance on the green, as you can see below.

DJ used a few different putters during that stretch, but there’s one thing that has stayed consistent: A subtle change in his pre-shot routine, based off a drill from one of his coaches, that seems to has worked wonders on his putting.

Once he’s done, he simply steps up to the golf ball, places his right hand on the club, and then hits the putt.

The routine is a drill that DJ has been working on with his former college coach, Allen Terrell. It’s great for people who struggle pulling putts left, or de-lofting the putterhead through the stroke. Both of those things are caused when the right arm becomes too active in the stroke, and the right elbow too lifted too far off your body.

Holding your right arm with your left arm, as you can see below, fixes both those things. It keeps your right arm close to your side, which prevents it from closing the clubface and helps you release the putterhead with the correct loft so you get the best roll on your ball.