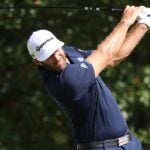 Dustin Johnson was second in strokes gained off the tee at TPC Boston.

To hear him tell it, Dustin Johnson has become a creature of habit and consistency.

This is hardly surprising nor breaking news; D.J.’s low-key public persona lines up with a guy obsessed with low-key consistency. But even by the 36-year-old’s new standards, Johnson’s victory party after stomping the field at TPC Boston sounded particularly tame.

After taking care of some Northern Trust media obligations post-round, Johnson said he drove to the airport and boarded a plane to Chicago, where he’s now gearing up for this week’s BMW Championship. What was the party like on that flight?

“Honestly on the plane on the way here I had some food, I was watching my iPad, and then I was looking at the book for this week,” he said. Big-time stuff. Need some more iPad details?

That, folks, is what a $1.7 million first-place check gets you: A cozy plane ride with Discovery Channel reruns. It sounds pretty nice, to be honest — just pretty tame, too.

But what, you might ask, does this have to do with Dustin Johnson hitting a fade — admittedly the question this article promises to answer? How does it connect to him hitting laserbeams with his driver, moving ever-so-perfectly left to right across our TV screens, searing indelibly into our minds? This may be a stretch, but I think there’s a common thread here, the low-key plane rides and the low-key ball flight. Consistency. Repeatability. So I asked Johnson: What does he like about the fade?

“Well, it works,” he said. Johnson may have been hoping that would suffice; he doesn’t tend to waste words in press conferences. But after a short silence, he considered the question and gave a more complete response.

“So I played a draw for a lot of my career out here, and then I just remember at the end of ’15, I think, going into ’16, I was at Sherwood [in southern California] and me and Butch [Harmon] had been working on hitting a fade, like, all the time we were working on it, and I would hit it occasionally when I needed to and didn’t mind it.”

The draw is a powerful but fickle beast; it tends to travel farther but can tumble out of control more easily, too. Johnson wanted more control.

“I was working with a new driver, I can’t remember exactly which one it was, but playing Sherwood you’ve got to drive it really straight, and I was really struggling. I just wasn’t happy with the way I was hitting the ball. So I went out, I said, today I’m going to cut every shot, and I think I shot 61 or something. The next day I went out and said, ‘I’m going to fade every shot today, as well,’ and I think I shot 62. After that I think I said, ‘Okay, I’m going to fade it from now on.’ Pretty simple.”

Simple when he puts it that way, at least.

This story sounds outlandish but no more outlandish than the 67-60-64-63 he just shot at TPC Boston, and it checks out pretty exactly with a scenario Johnson recounted during a sitdown interview with GOLF.com at the time. Johnson was playing with Wayne Gretzky in the fall of 2014 (a year off from what D.J. recalled, but otherwise checks out) and Gretzky told him on the first tee, “You should shoot the course record today, let’s do this.” Johnson shot a course-record 61. The next day, he shot 63. The day after that, 61 again.

At the time, Johnson and fiancee Paulina Gretzky were spending several months at Sherwood while she was pregnant and he was on a mysterious leave of absence from the PGA Tour.

“Really simple,” he said at the time. “That’s what I’ve been working on, really simplifying everything.”

A half-decade later, the mantra rings true and looks particularly effective. But let’s get back to that fade.

Johnson prefers to move the ball left to right throughout the bag, but he’s happy to hit a draw with his irons if the shot calls for it. A draw driver is even more rare.

“The driver is the only club that I do not want to hit a draw with,” he said. “Just the way I have it set up, the way I like to swing it, just to be able to control it. It just doesn’t like to turn right to left.”

Never say never, of course: Johnson made an exception for the PGA Championship at TPC Harding Park, where he and several other contenders talked about the value of being able to work the ball both ways off the tee.

“I can draw it if I need to,” he conceded. This may understandably be a point of pride. “I worked on it a lot at the PGA Championship just for the tee shot on No. 12. I mean, you had to draw it there and I didn’t like hitting 3-wood just because it left me too far in. So I worked on it there and actually hit it a couple times last week.”

At the PGA Championship, Johnson led going into the final round and finished T2. In Boston he posted the Tour’s biggest blowout win in over a decade. Oh, and now he’s back to world No. 1, too.

Johnson isn’t trying to win events with his driver anymore. He’s dialed it back a bit, slipping to 17th on Tour in driving distance after 10 years in a row inside the top six (and eight of those years inside the top three). Instead, he’s trusting the entirety of his game — and keeping it simple.

One more bit of curiosity, then: What does someone who just shot 30 under for four days work on at the driving range? Exactly the same stuff he worked on last week, Johnson said. That makes sense.

“I mean, still working on exactly the same things as I was doing last week, just making sure everything is staying consistent, got the same feels. The ball is just starting on my lines and I’m hitting the same shots. That’s what I’ve been working on this week is just kind of going through the same routines I did last week just to keep the swing in check.”

Feel free to try it at home, too. We just can’t guarantee the same results.