I was ‘honored’: Why Bryson DeChambeau says he looks up to Rory McIlroy 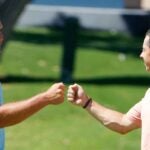 Bryson says Rory is an example of hitting the ball far without hurting your body.

When Bryson DeChambeau lifted the U.S. Open trophy last year, he changed the game. He showed that no matter the course, the more speed you have, the bigger the advantage. It reflected a clubhead speed arms race of sorts, one which even Rory McIlroy — the tour’s best driver of the golf ball — admitted he was lured into.

“I’d be lying if I said it wasn’t anything to do with what Bryson did at the U.S. Open,” he said. “I think a lot of people saw that and were like, ‘Whoa, if this is the way they’re going to set golf courses up in the future, it helps. It really helps.’”

Speaking to GOLF Top 100 Teacher Claude Harmon III on this week’s episode of Off Course, which you can subscribe to on iTunes right here, Harmon asked GOLF.com’s Playing Editor Bryson DeChambeau about the distance race he supercharged — and Rory’s comments in particular.

“Honestly, I was honored,” DeChambeau said of McIlroy, adding that McIlroy himself embodied the new wave of athletic, long-hitting, modern golfers.

“He was somebody I looked up to in college and the latter part of high school. He was a dude that really didn’t look that big and he hit it forever and I wanted to be like that. I was like ‘woah, if I can do that that that’d be amazing.'”

The big takeaway golfers can take from McIlroy’s game, he said, is the speed he’s able to generate while staying injury-free.

“He’s been pretty injury-free, which is impressive. He’s done it right. He’s done a lot great things,” he said. “That in itself should be a lesson: Even if you’re not as big you can still hit it far, if you train really hard.”

That, ultimately, is the same message DeChambeau says he’s trying to showcase himself: That if you work hard enough and find your own best way, there’s no limit to your potential.

“I got made fun of all the time for being a little different, for caring about the game of golf, for trying to do something different,” DeChambeau said. “All the other high school coaches said, ‘This isn’t going to work, your swing is not going to work,” he said. “But you can do things differently if you really wanted to. That’s the beautiful part about the sport.”

You can listen to the full episode on Spotify below:

Does slow play cause higher scores? This data suggests it might

Rules Guy: Can I tape my average yardages to my clubheads?