New tech shows exactly how much Bryson turns on his backswing 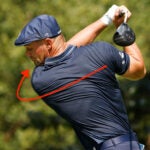 A new wave is on the horizon in golf instruction (and one I‘ve written about before because it’s going to be a big deal):

That may seem pretty far-fetched, but so was the idea of videotaping your golf swing, and the idea that golfers would be able to track metrics like clubhead speed and ball speed instantaneously, like they do via technologies like Foresight Quad.

3D motion-capture exists right now, but the systems are really big, really expensive and often hard to find. Not the kind of thing golfers can work into their regular routine. But that’s starting to change: GOLFTEC has its contactless OptiMotion technology in more than 150 GOLFTECs nationwide, and another innovator in the space is the impressive Sportsbox AI.

Sportsbox AI is an app, currently in beta, that uses artificial intelligence to generate a 3D model based on a two-dimensional video. After recording a video face on, the app superimposes trackers on a number of key points on the body, which users can then use to dissect golf swings in 3D.

Which brings us to Bryson.

GOLF Top 100 Teacher Terry Rowles has been an early adopter of the technology, and last week, used the app to showcase Bryson DeChambeau’s shoulder turn. And in doing so, illustrated why the technology is going to be so useful for golfers in the future: Rather than eyeballing how much DeChambeau turns his shoulders, the app pegs his shoulder turn at the top of the backswing to 112 degrees from where they started.

“That’s on the highest side,” Rowles writes.

And how does he get that much shoulder turn? By feeling like he stretches his arms as high and wide as possible on the backswing, as he wrote in his GOLF Magazine column in his capacity as Playing Editor:

“Everybody’s biomechanics are unique, but there’s one thing all our muscles are designed to do: expand and contract. When you see me hit a drive, that’s my main swing thought, and it’s my advice to any golfer looking for their own power boost. … I keep the wide-and-high feeling all the way to the top when I swing.”