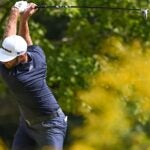 The 2020 Northern Trust Open turned into a romp. Dustin Johnson was in full flight. Nobody, and nothing, could stop him.

It was a joy to behold, and I count myself fortunate to have gotten a front-row seat to some of the the symphony (I was a part of the call for his final 9-holes in the second round. Regretfully, his inexorable march toward a round in the 50’s slowed as I joined him. I watched him make two birdies on the 10th and the 11th and then the spigot dried up as he parred his final seven holes for 60).

Anyhow, it was a majestic performance, one that is loaded with lessons to help you improve.

Before we dive into golf swing technique, take note that DJ is one of the most — if not the most — talented golfers in the game. Yet DJ also shot two consecutive rounds of 80 at the Memorial in June 2020, and followed that up with 78 and a W/D the following week.  Three short weeks after that he logs a mind-numbing 30-under par to win in a canter.

This is what golf is; it’s how golf behaves; it’s what golf does. It will confound your mind and confuddle your spirit. It will drive you bananas at it rips the rug out from underneath you, and surprise you when, in its benevolence, it gifts you that once-in-a-lifetime round.

What you need to do is remain consistent throughout. No matter the situation, retain your poise.

Mind, will, emotions and attitude; work hard to keep those in check. It will be difficult, but you have to approach everything with an even keel.  Watch DJ — he does just that. Whether it is 60 or 80, he does not change. It is a hard lesson but one that is guaranteed to make your life less complicated, and golf easier to manage.

Back, back to the golf swing. Many people love to focus on DJ’s extended wrist at the top of his backswing, along with his unbelievable mobility and speed.  I, however, want to highlight his body tilts to you.  They are athletic, on point and worth emulating.

Understanding on your body tilts

You are essentially able to bend in four planes: forward, backward, to the left side and to the right side. And you move through all of those during a full golf swing.

Dustin Johnson is a beautiful model for all of these and it is worth your while to pay attention to the tilts as you look over his swing.

The good news is they are easy to drill and learn:

Grip a golf club with body in regular standing posture and your feet about shoulder-width apart. Your arms should be marginally extended and relaxed with the shaft over your nose and pointing to the sky.

Bend forward from your hips towards the ball— this is “Forward Bend”.

Return to neutral (upright) and then bend backwards, away from the ball — this is “Backward Bend.”

Return to neutral and then bend to the right — that is “Right-Side Bend.”

Putting body tilts to work in your golf swing

Now that you know what they are, blend those positions using the key below. Pose each area of your swing, and notice that you may feel some stretching and a little work. Hold the position and once you have a handle on it return to address and try to rotate and swing into that position and then hold it for good measure.

Practice these positions regularly and get those body tilts in order.  As you do you are sure to hit the ball more consistently.