This is the biggest mistake golfers make as they get older, says veteran Omar Uresti 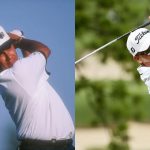 Don't fall into the trap of trying to swing harder.

For as much fun as it is watching golf’s elite players accomplish heroic feats of athleticism, it’s not always very relatable — by design.

Sure, it’s certainly very entertaining and, indeed, you can learn a lot form what they do. But those kind of players seem to operate in a different golf universe. It’s inspiring and insightful, but often, the most useful information comes from players who aren’t the most athletically gifted, yet still play top-level golf. It comes from the journeymen. Guys like Omar Uresti, who I spoke with on Wednesday ahead of his playing in the Palmetto Championship at Congaree.

Omar turned professional in 1991, spent 20 years as a PGA Tour member and the ensuing 10 on the PGA club pro circuit. 30 years on, he’s still playing impressive golf: Earlier this year, he won his second PGA Professional Championship at the age of 51, which earned him an exemption into the PGA Championship last month.

And he’s got some advice for the rest of us.

As you get older, your body will get tighter, your swing will change, and you’ll gradually lose distance because of it, which naturally leads lots of golfers to try to counteract this trend by swinging harder. But that’s a dangerous game, says Uresti.

“I’ve been working trying to know my limitations. Not swing so hard at it. Try to keep it in play,” he says. “That’s what I used to do years ago instead of thinking so much about distance.”

It’s important to note that Uresti doesn’t suggest forgoing the gym completely: He still does push ups, sit ups and stretching. You’re better off going that route if you’re trying to maintain (or gain) distance off the tee. But changing your technique and trying to swing harder is only going to hurt your accuracy and may lead to injury.

“Usually when you try you’ll hit it longer but you’re not going to hit it as straight” he said. “When you don’t hit it long to begin with, missing more fairways isn’t going to help.”

DO: Practice your short game

But if the secret to aging gracefully from tee-to-green is knowing your limitations, the same doesn’t follow around the greens, Uresti says. Focusing on keeping it smooth and in play off the tee will help, but accept that as courses become longer for you, you’ll probably miss more greens. So spend less time on the range and more practicing your short game.

“I do a lot of putting drills; putting through a gate to make sure the ball starts on the correct line,” he says. “If you can keep your chipping consistent and make putts, you’ll cover for lots of other areas in your game.”