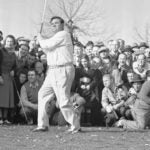 Babe Ruth's mark on baseball is indelible, but he also left a mark on golf.

Virtually every sports fan knows the mystique surrounding Babe Ruth. Although his playing days came well before many of us were born, his legend endures and his impact on the game of baseball is unmistakable.

But did you know that Ruth pioneered a popular drill for the golf swing that is still used today?

As told in Brett Crygalis’ recent book Golf’s Holy War: The Battle for the Soul of a Game in an Age of Science, Ruth had a backup in his playing days named Sam Byrd. One day when the Yankees were visiting Atlanta, Byrd, a Gerogia native, went out to play a round with Bobby Jones — yes, that Bobby Jones. Byrd played well and, after the round, Jones remarked that his playing partner was “the very best man with a driver I ever saw.”

The continued excerpt, published in the New York Post, can be seen below:

“Byrd traced his proficiency back to Ruth, who taught him how to hit a baseball when he was first called up in 1929. Ruth explained a drill he used where he kept a handkerchief under the lead arm — in Byrd’s right-handed stance, that meant his left arm. The goal of the drill was to keep the swing of the bat level, avoiding an uppercut or a downward chop, which would both result in poor contact. Ruth added that all good hitters “brace” on their back leg, coil around it, then fire through with big muscles — meaning the core muscles between the hips and shoulders — transferring their weight to the front leg. It’s exactly what a grainy video of Ruth hitting a home run looks like. By keeping the lead arm in close to the body, the whole thing stays “connected.” The drill is still used across sports today, with PGA Tour players often using headcovers instead of handkerchiefs.”

This drill should sound familiar for golfers. And the theory on keeping everything connected and compact while letting the big muscles do the work is still employed to this day.

Byrd eventually left baseball and turned his attention to golf, where he went on to win six times on the PGA Tour. His philosophy on the golf swing was extremely similar to that of the baseball swing, all because of that drill from one of the greatest baseball players of all time.

The famed scribe Grantland Rice even approached Byrd about the possibility of writing a book about the differences between the golf swing and the baseball swing.

Byrd’s response? “It’s going to be a darn short book.”

Why Jordan Spieth's practice swing looks nothing like his real swing

'One of the best lessons that I've ever got': What Shane Lowry learned from Tiger Woods' 10 at the Masters