The key shot players are using at the U.S. Open — and how you can hit it 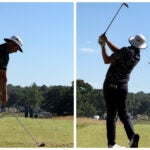 With the wind up and the course firm, the knockdown shot has become an essential tool that pros are deploying at the U.S. Open.

BROOKLINE, Mass. — It’s U.S. Open Sunday, but all week the tournament has felt more like its British counterpart.

The wind gusted, the rain drizzled from the clouds, and the sweaters came out during the third round. It made for a fantastic contest, and players are bracing for even more of it on Sunday.

To deal with it, players have needed to reverted to their Open Championship script, too. Mainly, hitting lots of knockdown shots to keep the ball lower, under the wind, with less spin. They’ve been doing it off tees to find the fairway, and into greens as players stay laser-focused on their “cover” numbers.

GOLF Top 100 Teacher Kellie Stenzel explains how to hit one yourself — and it’s simpler than you might think.

“A very reliable way to accomplish this is to take extra club, like a 7-iron instead of 8 for example, and a smaller swing,” she says. “If you struggle making smaller swings put slightly more weight on your forward foot and that can help to naturally limit the backswing length.”

Denny McCarthy, who shot 68 in the windy conditions on Saturday loves this advice. Many players tend to hit this shot by playing the ball more in the middle of their stance and gripping down on the club. It works, he says, but he prefers the club-up-and-swing-softly route.

“I’ve really learned how to control my golf ball by taking a couple of clubs down and just hitting it really, really soft,” said Denny McCarthy, who shot 68. “Hitting it 65 percent or 70 percent so the spin is not rising up on you.”

Increasingly, that seems to be way Tour players prefer hitting this knockdown shot. By treating it like golf’s version of a bunt. It’ll be a valuable tool in players’ arsenal at the U.S. Open on Sunday, and one simple enough to use yourself.