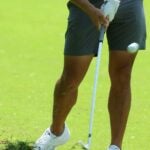 Collin Morikawa makes contact with the ball during a practice round prior to the PGA Championship.

TULSA, Okla. — The greens at Southern Hills are small, elevated, and slope off in a variety of different directions. The man who walks away with the Wanamaker Trophy this week will need to excel in multiple different areas, but above all else: They’ll need to throw darts with their irons.

“You’re going to need to be really good with your iron game this week,” says GOLF Top 100 Teacher Justin Parsons, who coaches Louis Oosthuizen, among others.

“There’s some room to move it off the tee, but the greens are very small,” adds fellow GOLF Top 100 Teacher Drew Steckel.

With that in mind, the question then becomes: What makes for a good iron player? Especially at the top of the sport, what separates the very good from the great? That’s the question I posed to three different major champions ahead of the 2022 PGA Championship. Here’s what they each had to say.

2014 PGA champion Rory McIlroy comes into the year’s second major off the back of two top-five finishes, and fifth in Strokes Gained: Tee-to-Green. This week, he says his key to improving his iron play is to identify and practice two specific weaknesses in his game: Approaches to left pin positions, and making sure not to swing too hard.

When the 2017 PGA champion was looking to upgrade his iron game, he went to a higher power. After playing with Tiger Woods for the first time, he asked him, quite simply: What could he be doing better?

“He said, ‘You don’t move the ball enough,'” JT said Tiger told him. “For me it was like, he’s pretty good, I should probably try it.”

Ever since, Thomas spends more time hitting different types of shots — draws, fades, high and low — on the driving range. When he’s on the course, he’s trying to pick a specific shot to work it into the pin. It doesn’t just give him more control over his golf swing; it allows him to attack more pins that were previously off limits.

Morikawa, the 2020 champion, is one of the best iron players on Tour — indeed, of his generation. But even so, his philosophy is simple: Don’t only think about the good shots. Think about the best place to miss your approach shot. Small mistakes are OK, he says. They’re going to happen. The best players know how to avoid the really big ones that will ruin your round.

“Even though the rough is pretty penal and the ball sits down, sometimes the rough might be better if it gives you more green to work with,” he says. “You might be able to run it up onto the green, or maybe a bunker is going to be a better angle. It’s just figuring out where you’re going to give yourself the biggest target to be able to play from on your next shot.”