How to bounce back after a shank, according to an LPGA star 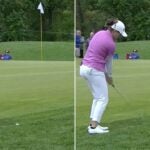 How do you recover from a shank? One LPGA Tour player has an excellent remedy.

CLIFTON, N.J. — Ally Ewing got off to a tremendous start in her chase of the title at the LPGA’s Founders Cup. Her card included six birdies and an eagle, and her first-round 67 leaves her comfortably in the top 10 at Upper Montclair Country Club.

However, the round could’ve been one shot better if not for a surprise appearance from the shank monster.

After a slightly miscalculated approach shot at the par-4 13th, Ewing’s ball nestled just on the edge of the first cut of rough. With some gnarly grass just behind the ball, putting was out of the equation. Instead, she opted to use a wedge to attempt to pitch the ball onto the green.

It didn’t quite work out.

Instead of a nifty chip onto the green, Ewing’s ball caught the hosel and shot off 45 degrees to the right.

All Ewing could do was laugh.

Every golfer knows that there’s no worse feeling than a cold shank. And there’s no shot more difficult than the first swing directly after you catch one on the hosel. But, as Ewing explained after her round, the best way to bounce back is to just laugh it off.

“We always say that it’s not far from being a really good shot,” Ewing said. “Yeah, just kind of put it out of your mind and laugh it off and move on with the rest of the day.”

The hosel rocket led to bogey for the two-time LPGA winner, but she had no more run-ins with the shanks for the remainder of the day. Laughing it off was just the remedy. Ewing bounced back with birdies on the following two holes to make up for her miscue.

Surprisingly enough, Ewing has some experience with bouncing back after a shank to post a good round. In fact, her 67 is not even her lowest tournament round that included a shank. During her Symetra Tour days, Ewing had a round of “7- or 8-under” that also featured a shank.

How did she recover back then, you ask?