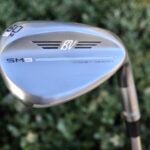 One of the most important aspects of Vokey’s new SM9 wedge is a visible technology that can’t be seen in the address position. However, if you were to flip over the wedge, you’d notice a slightly thicker piece of material situated in the toe section, just behind the topline.

Instead of designing tech that might stand out on a retail rack — go back and check out SM7 — Vokey chose to keep the overall look of SM9 simple and clean. Minimalist is the word that comes to mind.

“Tour pros want the improvements, but they don’t necessarily want it staring back at them,” said Corey Gerrard, Vokey’s marketing director. “There’s a definite balance that comes with making those improvements without altering the look so many of them have come to rely on.”

But let’s get back to the design changes. If you’ll recall, Vokey introduced a visible progressive center of gravity (CG) design with SM7 that helped dial-in launch condition by pushing the CG location higher on the high-lofted wedges and lower on the low-lofted wedges for more consistent performance.

The design earned high marks on tour and in the industry, but as Vokey began to take a closer look at the design, they noticed one issue with the higher CG location.

“What we were finding was as we went higher with the CG in SM7, it was going further back, which left that face open with a dynamic loft that was increasing at impact,” said Gerrard. “It would sometimes produce that high, floaty shot to the right.”

To combat the “floaty shot,” Vokey went to a more forward CG with SM8 to help square up the face at impact — but doing so produced a slightly higher launch. And if you know anything about tour players, having the ability to consistently flight a wedge is near the top of the wants list.

As is always the case, Vokey and Co. found a way to make it happen by keeping the CG forward and then raising it vertically to help lower launch without sacrifcing consistency in SM9. During GOLF.com’s head-to-head testing (see video above), SM9’s launch was, on average, 2 to 3 degrees lower than SM8 with upward of 300-500 RPMs more spin.

“One of the things we constantly hear from golfers is how low the Tour pros hit their wedges,” Gerrard said. “They can flight that 58- or 60-degree on a regular basis. That’s what we’re trying to do here for all golfers — lower that ball flight so we can get you more control through distance and accuracy. And you’ll be able to spin it a little more as well.”

To raise the CG slightly, Vokey made two subtle changes to the head, extending the length of the hosel — particularly in the higher lofts — and adding a “raised pad,” essentially more metal, in the toe section. The mass in the toe is tapered, but you’d need to look at it closely to pick up on the change.

Vokey and Tour rep Aaron Dill worked tirelessly to ensure the design change was concealed behind a slight bevel along the back of the topline, a design refinement the better player will appreciate.

“That was a tough one for Aaron and Bob,” Gerrard said of the tapered pad in the toe. “They’d look at some of the prototypes and say, ‘If I can still see it, the players aren’t going to look at this.’ Eventually, the guys got it down to a position where it was a really nice design.”

For the first time since SM6, Vokey is introducing a new Spin Milled cutting process that tightens tolerances to produce a consistently sharper groove for additional spin. Micro grooves are then individually cut between each groove to add bite on partial shots around the green. A heat treatment is then applied to the hitting area to extend the overall life of each groove.

Vokey’s SM9 (Tour Chrome, Brushed Steel and Jet Black finishes) retails for $179 and will be available for pre-order Feb. 17, and at retail March 11. The standard stock shaft is True Temper’s Dynamic Gold S200.

A wide variety of custom options will also be available through Vokey’s WedgeWorks program that makes it possible to choose from six toe engravings, stamping options (10-character Straight/Freestyle stamping; 15 characters around the toe; and two lines of 10 characters each) and custom paint fill.