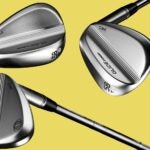 No one was more excited about the release of the Glide Forged Pro ($217.50 steel) than Ping staffer Viktor Hovland. At the top of the Norwegian’s wedge wish-list was the inclusion of a more compact version of the current Glide that suited his visual preferences. Ping engineers not only found a way to shrink the overall wedge footprint for Hovland — they added some new wrinkles along the way.

“One of the specific things that was asked, in large part because of Blueprint, was if we could go to a smaller wedge,” said Ryan Stokke, Ping’s director of product design. “The Glide 3.0 is a little bigger; it’s the performance platform in our wedge space. We have a lot of 3.0 on Tour, but there are those players, like Viktor, who want to see a little more capture and a smaller profile. From a sizing and shaping standpoint, we were already heading in that direction before we started finding a way to add different grinds as well.”

Forged from 8620 carbon steel, Glide Forged Pro is noticeably smalled heel-to-toe to create a “captured look at address” that allows better players to manipulate the head and work the ball at impact. In addition to reducing the head size, a new Emery face blast was added to the precision-milled face and groove to increase the texture on the hitting surface. As most golfers know, more friction means improved interaction between club and ball.

The precision-milled, wheel-cut grooves feature a 20-degree sidewall in the lower lofts (50 and 52 degrees) for optimal performance on full shots; the 54- through 62-degree offer a 28-degree sidewall and tighter radius to enhance spin around the green and from the bunker. The face texture and groove package works in tandem with a Hydropearl 2.0 finish on the head that’s designed to repel water for more consistent spin rates, especially from the rough and soggy conditions.

The reduction in bounce makes the “T” slightly more adaptable around the green. It’s available in three lofts, including a 62-degree. Eight custom grinds are also offered through Ping Wrx — the department that fulfills Tour and collegiate requests — for those golfers who need a highly specific geomtery.

While it’s only available in the “S” grind, the 59-degree Eye2 high-toe design is sure to turn heads. Designed after the initial version that debuted in the 1980s, the 2021 version has a blended hosel and traditional sole design that matches up more closely with the original. Compared to the other “S” grind lofts, the Eye2 has approximately 1.5 degrees less bouncne.

“I may be a little biased since my swimming pool as a kid was shaped like a PING EYE2 wedge, but I love the high-toe option in this line,” said Ping president John K. Solheim. “It gives me the confidence and versatility to play high and low shots with a lot of spin without being intimidated. It’s especially good out of the bunker.”