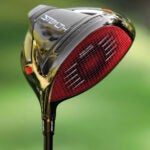 A 60-layer carbon face is at the heart of TaylorMade's Stealth driver.

TaylorMade knows what you’re probably thinking: the carbon face has been done before. In the early 2000s, several equipment manufacturers released drivers sporting a carbon-composite face, but nothing stuck.

The knock on the material, as it pertained to face construction, was that it never produced the sound (too dull) or ball speed numbers (too slow) to make it a viable long-term option.

Titanium was just starting to take off and gradually became the face material du jour, but this wasn’t the end for carbon composite. Club engineers still found carbon to be beneficial as a means to remove discretionary mass from the crown and sole, repositioning it in strategic locations to enhance launch, spin and stability.

Indeed, carbon had a place in the industry, but it wasn’t in the face. Or at least that’s what many assumed.

While TaylorMade pressed on with titanium, they continued to conduct research behind the scenes with carbon over the next two decades. Carbon faces with a layer of titanium and futuristic polymer covers were tested out — along with a $1,000-plus carbon face driver called Gloire Reserve that debuted around 2013 — but it wasn’t until 2018 that TaylorMade started to view carbon as a potential titanium replacement.

“We’ve found ways to move driver technology and face design forward,” said Tomo Bystedt, TaylorMade’s senior director of product creation. “But, like anything else, there’s an expiration on certain materials and technologies. As an R&D organization, we’re trying to look into the future and see what our next 5 to 10 years are going to look like.

“What we learned is there is no dramatic improvement for titanium, so we could see that writing on the wall about 3 to 4 years ago when we introduced the Speed Injection Technology. Now we were really at the limit of how good — and fast — we could make the face.”

Over the next four years, TaylorMade worked diligently on a driver that’s been dubbed the “Carbonwood.” In TaylorMade’s eyes, the 60-layer Carbon Twist Face found on the new Stealth, Stealth Plus and Stealth HD (High Draw) is the future of driver face design. The company is so bullish, in fact, they’re ceasing production of titanium drivers going forward. This is the point of no return. 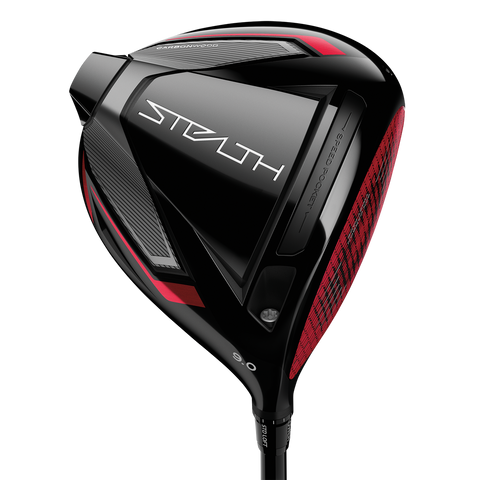 “We’re sunsetting the entire technology that brought us to the game, which is metalwoods,” Bystedt said. “It’s going to be goodbye. We started this and now we’re killing it.”

Killing off a known technology for an unknown came with some significant hurdles that TaylorMade had to clear before bringing the can’t-miss red carbon face to retail. It started with figuring out the manufacturing process, which has more steps than you’d find at an automotive assembly plant. It’s one of the reasons TaylorMade started manufacturing the carbon face well before SIM2 was released.

“We needed to learn as much as we could about the manufacturing early on,” said Bystedt. “To make a couple thousand is one thing, but to make a hundred or two hundred thousand is a different deal, and you learn a lot during the process.”

What TaylorMade learned during the manufacturing process was that carbon held performance benefits. Reducing the overall face weight (26 grams overall) by 40 percent — when compared to a titanium face — allowed designers to increase the face size by 11 percent (versus SIM2) and add weight to the body to maximize the transfer of momentum at impact by positioning more mass behind the face for a higher COR (Coefficient of Restitution) value.

“This is not a weight savings for other benefits, it’s to get you more ball speed,” said Bystedt. “We’re not changing the stiffness of the face; it’s the same stiffness as a titanium face, which is why the CT readings will be the same. But now we’re able to deliver a higher COR with the same CT value. It’s the secret sauce.”

The results have already shown up early testing with TaylorMade’s Tour staff, where Tommy Fleetwood and Sergio Garcia both saw an increase of over 2 miles per hour in the ball speed department. During GOLF’s robot testing, data revealed a similar increase of 2 miles per hour during head-to-head testing between the Stealth and SIM2 Max.

To give the face the right amount of spin with ideal launch conditions, a polyurethane layer was added to the carbon fiber that includes full-face scorelines to improve spin in wet conditions. To produce optimal spin in dry conditions, a microtexture was situated between the grooves to reduce spin at impact.

A titanium sole and internal sound ribs were also added — SIM2 featured a mostly carbon sole construction — to increase the “metallic” noise and feel at impact, thus eliminating the sound issues that plagued previous carbon faces. The changes have been well received by many of TaylorMade’s Tour staffers, who chose Stealth over SIM2 in a sentiment rating regarding sound and feel.

TaylorMade’s Stealth lineup consists of three different models. The standard Stealth ($579.99; 9, 10.5, 12 degrees) has more weight situated low and deep in the head for a 15 percent higher MOI when compared to the Stealth Plus. The Stealth Plus ($599.99; 8, 9, 10.5 degrees) offers an adjustable weight track in the sole for shot shaping purposes and provides 200-300 RPMs less spin. The draw-biased Stealth HD ($579.99; 9, 10.5, 12 degrees) is designed to promote a right-to-left flight, with similar spin to the Stealth, via an Inertia Generator positioned more in the heel. Drivers will be available for pre-order Jan. 4, and at retail Feb. 4.

With a larger overall profile, the 190cc Stealth features a 3D carbon crown that made it possible for engineers to place more weight low and deep in the head to increase launch and bolster forgiveness. A C300 Twist Face is geared to ramp up speed, while TaylorMade’s V Steel sole is designed to promote versatility with reduced drag when hitting off the turf.

The 175cc Stealth Plus is built around the same ZATECH Titanium face found on the SIM and SIM2. The ultra-thin, resilient material maintains a high level of ductility while still promoting fast ball speeds across the entire structure. An 80-gram V Steel sole helps improve the overall forgiveness — Stealth Plus boasts the lowest CG even in an adjustable fairway wood — of the head without sacrificing turf interaction.

When compared to SIM2, the Stealth Plus delivers a 12 percent higher MOI (a measure of forgiveness); that number increases to 18 percent in a head-to-head with the original SIM.

Much of the improvement in forgiveness can be attributed to an infinity crown design that increased the carbon surface area by 12 percent. Much of the discretionary weight saved from the crown was then positioned low in the head for stability purposes.