After playing with two new putters in the last few months, Tiger Woods may be returning to the flatstick he knows best.

On Tuesday, Woods played a practice round alongside Rory McIlroy at the BMW Championship. Multiple observers spotted Tiger with a different putter than he used Monday in the final round of the BMW Championship. Reports suggest that the “new” club is not new at all, but his trusty old Scotty Cameron Newport 2 putter.

He’s putted with it on every green so far. pic.twitter.com/OKKRq1OvGg

And here’s to you, Mr. Newport 2. A nation turns its lonely eyes to you. pic.twitter.com/fdPQEf4n5a

Woods switched to a TP Collection Black Copper Juno putter with “Tiger” stamped in red on the back before the start of the Dell Technologies Championship just one week ago.

But the club that TaylorMade blade replaced, a TaylorMade Ardmore 3 mallet, hadn’t been in his bag long. Woods made the surprising switch to the mallet at the Quicken Loans National in late June. 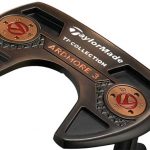 He began his most recent comeback with the trust Scotty Cameron by his side. He has racked up an incredible 13 major wins with that putter.

While he used the Scotty Cameron on many holes Tuesday, Woods also had at least one of the TaylorMade putters in his bag during the round and tested it as well.

Tiger has the Juno and Scotty in the bag today🔥🔥 pic.twitter.com/tVElxOxbGo

Last week, he finished 36th in strokes-gained putting at the Dell wielding the TaylorMade Juno, an improvement on his performance the previous week.

We will have to wait and see if the Scotty stays in his bag at Aronimink, or if he decides to use one of his TaylorMade flatsticks instead when the first round of the BMW begins on Thursday.