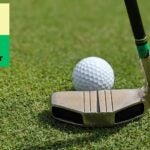 Could the One Stroke putter's revolutionary design fix my putting?

There were two curiosities that sent me down this particular rabbit hole, both related to the idea of making a more straight-back, straight-through, square-to-square putting stroke.

(Yes, I’m aware there’s all sorts of issues with that idea, and that it’s dependent on all sorts of stuff. Lots of smart teachers maintain its not even possible. But, nevertheless, I was interested.)

In a nutshell, I was wondering if there had ever been a putter designed where the club’s center of gravity was balanced directly over the middle of the club. Gravity pulls weight down, so if more of that weight was centered towards the center of the club rather than the heel, the more inclined the club would be to move in that direction, right? Seemed to make sense to me, at least.

Putters with heads that are much heaver than the rest of the club, like the Bloodline, flirt with this idea, same with putters that are incredibly upright. But I wanted more, which is why I eventually discovered a putter called the “one-stroke.” It was listed for $14 on EBay, but I offered $10 and my offer was accepted.

About a week, later, my new club had arrived and it was time to test it out.

As you can see, the hosel of the One-Stroke putter comes out of the toe of the putterhead. This, both in theory and practice, puts the putter’s center of the mass (otherwise knows as its balance point) almost directly over the center of the putter head.

I found exactly nothing else about the One-Stroke Putter, its origins or its history, online. But apparently this idea has been tried before, specifically by a putter company called Inseyed Golf.

I thought it would be strange looking down at the putter standing over the ball, but I was surprised. Because of the putter’s onset (where the shaft is behind the putter face, the opposite of “offset”). It was an adjustment at first, sure, but a small one.

I conducted a mini experiment — 10 putts to a hole 7 feet away using a Foresight Quad — and immediately something felt off. A kind of strange I’ve never felt with any other putter.

My putting stroke, especially on a putt this short, is usually pretty close to zero, and that remained true initially with the One Stroke. My first of ten putts was exactly 0.0 — meaning the putter face was perfectly square at impact. The putts themselves were fine at first, but each putt seemed slightly worse than the one before. The putter felt wobbly at the end, and the putts had stopped going in.

Consulting the Foresight, and I found that in the space of just 10 putts, my putting stroke had shifted almost two-and-a-half degrees; from fully square to significantly closed. I was making putts at first; now I was missing putts pretty significantly left. What was going on?

It was at that point I realized the fatal flaw in the putter’s design.

It’s an increasingly popular idea — Justin Rose’s putter is weighted this way —but the problem with the One Stroke was it was too toe-balanced.

It was a product of the club’s onset; the putter being shafted through the toe meant you needed some onset to get a good look at the putter, but that onset also caused the putterhead to want to close and pull putts left.

Where do we land on the One-Stroke experiment? All in all, I’d like to think I made a valiant effort to explore outside the box. I invested 10 bucks — an entire Alexander Hamilton! — and went in with an open mind. It just wasn’t meant to be.

Perhaps some manufacturer will revisit the idea at some point in the future. In the meantime, the One Stroke will be consigned to my putter graveyard.

Best of 2021: 3 pricey items worth splurging on

Deal of the week: The sporty and casual Adidas Adicross Bounce