‘He’s always looking to get better’: Why signing Jon Rahm made sense for Callaway 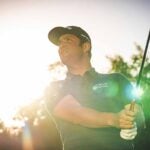 Jon Rahm and Callaway opened the new year by announcing a multi-year agreement.

On Monday, Callaway Golf announced that it had signed Rahm to a multi-year club and ball deal; Rahm will also wear apparel from TravisMathew, which Callaway acquired in 2017. The world No. 2 will debut his new bag (and threads) at the Sentry Tournament of Champions this week, where he is expected to play Callaway prototype woods, irons and a Chrome Soft X ball.

Rahm is a world-class player, but what else about the 26-year-old Spaniard’s approach to the game appealed to Callaway? We asked Tim Reed, Callaway’s senior vice president of global marketing. GOLF.com: Why sign Rahm? What does he bring to the table for Callaway?

Reed: Jon is one of the most exciting players in the game, and he’s already achieved so much in professional golf at such a young age. He’s a proven winner, a dynamic personality, and he has a lot of confidence in our equipment. Jon is just an out-and-out competitor, and we look forward to seeing him at the top of the leaderboard a lot this year.

How do you plan to use Rahm in your advertising and marketing?

We will be featuring Jon prominently in our advertising and marketing initiatives. He’ll be very visible in our TV commercials and in content across all of our Callaway platforms. Of course, when you have one of the best players in the world, you’re going to want to use him. But more than just showing his association with Callaway, we’ll be providing unique and engaging content with Jon that we think golfers are really going to enjoy.

What playing and personal qualities of his do you plan to highlight?

Even with how good a player he is, and how well-rounded his game is from driving the ball to putting, he’s always looking to get better. That’s something that really stood out to us when we first started working with Jon on his new equipment. He’s accomplished a lot already, but he’s still looking for the best clubs and ball setup, and he’s still trying to improve every day. That’s something that every golfer can relate to, whether you’re an elite Tour pro or a weekend player.

Was it important to Callaway to secure a top-3 player?

More than just his ranking, he really aligns with who we are as a company. Jon puts such an emphasis on performance, like we do, he has a strong passion for golf, and he wants to win every time out. Those are all qualities that fans clearly respond to with him, and we love what he brings to Callaway. When you look at our PGA Tour roster, we have headline players like Jon, Xander Schauffele and Phil Mickelson. We have plenty of proven winners like Marc Leishman, Kevin Kisner, Danny Willett, Kevin Na, Dylan Frittelli and Henrik Stenson. And we have exciting young players like Will Gordon, Sam Burns, Maverick McNealy, Eric Van Rooyen, Jeoungeun Lee6, Carlota Ciganada and Georgia Hall. We’re proud of the staff we have in line for 2021.

People may not know that Rahm isn’t entirely new to Callaway equipment.

He used a number of our clubs while in college [at Arizona State University], prior to turning professional. When we had the chance to test with him, right away he fell in love with the golf ball and the performance improvements that he could see across the bag. We couldn’t be more excited to have Jon on our Callaway Tour Staff.