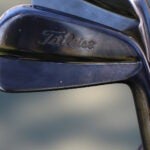 It’s not uncommon for professional golfers — especially those on the PGA Tour ­— to use custom clubs that are slightly different than ones available at retail.

Pro golfers have precise preferences, so golf manufacturers do everything they can to provide exactly what the golfer wants and needs in order to play their best. Some adjustments are simple cosmetic tweaks, while others can be full-scale structural changes.

Thomas’ custom “621.JT” irons are constructed with zero offset, while Scott’s “681.AS” irons were built with a healthy amount of offset to match his previous 680 Forged irons from 2003. It remains unclear whether Titleist will ever make those prototypes available to the market, but it’s likely the company will use feedback from Scott and Thomas to help improve their retail irons in the future.

Flash forward to the 2021 RSM Classic, and we spotted another batch of custom Titleist irons in the bag of Callum Tarren, a Titleist staffer.

Tarren is using a mixed set of irons, including black versions of Titleist’s 620 MB, 620 CB and T100 irons, which are different than the chrome look of the retail versions. This isn’t the first time Titleist has made blacked out irons, though. After the company’s previous iteration of T-series irons hit the market in 2019, Titleist released black versions of the irons in August 2020. The 2020 black T100 and T200 irons were made with a high-polish black PVD finish to give them a stealthy look.

It appears Titleist is back at it again using the black PVD finish on these tour-only 2021 irons.

Since Titleist has history of releasing black versions of irons to the market following the retail release of its chrome irons, it is possible that Tarren’s black irons end up hitting the market. For now, though, Titleist says Tarren is bagging “tour-only” irons.

While we wait and see if Titleist releases them to public, enjoy the photos GOLF.com captured on Tuesday at the RSM Classic.