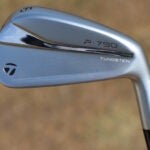 When TaylorMade’s first-generation P790 irons hit retail in 2017, they helped introduce an entirely new category of “Player’s Distance” irons to the market. The P790s were unique because although they looked like simple blade-style irons with clean back cavities, they were packed with hidden technologies that provided distance and forgiveness.

The 2017 P790 irons had thin faces, hollow-body constructions, and an innovative SpeedFoam material that sat between the face and body to help boost ball speed and feel. In 2019, TaylorMade updated the P790 designs to have even thinner faces, 20 percent larger sweet spots, and they used Progressive Inverted Cone Technology (PICT) to improve accuracy. To date, the P790 irons are one of the best-selling iron franchises in the company’s history, according to TaylorMade.

Now on its third-generation of P790 irons, which are set to hit retail on September 3, TaylorMade has made significant changes to one of the core technologies in the franchise.

Rather than using the original SpeedFoam material between the face and body of the irons, TaylorMade has developed a new “SpeedFoam Air” urethane material that’s 69 percent less dense. The lighter weight design equates to an average of 3.5 grams saved in each iron head, according to the company.

Thanks to the weight savings from SpeedFoam Air, TaylorMade was able to lower CG (center of gravity) to improve launch, and the company is reporting that the new 2021 P790 iron heads have the thinnest faces in the franchise’s history.

The multi-material heads have 8620 carbon steel bodies and forged 4140 steel faces that measure 1.5mm in thickness. Also, the face structure itself was redesigned for this year after TaylorMade’s team charted the most common impact points from “thousands and thousands” of golfers. According to the company, the sweet spot now better aligns with the center of the face and improves shots hit on the high-toe and low-heel.

“SpeedFoam Air is the heartbeat of the new P790 irons,” said Matt Bovee, head of product creation for irons at TaylorMade. “The development of this lightweight urethane material allowed us to strategically reconstruct the iron head to promote optimal launch conditions and a sweet spot that covers the most common strike points on the face.”

The 2021 P790 irons, as with the previous generations, also use heavy Tungsten weighting (up to 31 grams per head) for greater forgiveness, and a Thru-Slot Speed Pocket in the lower portion of the heads to boost ball speeds and face flexion at impact.

Like the standard iron set, the P790 UDI iron heads have 8620 carbon steel bodies, forged 4140 steel faces, hollow-body constructions that are filled with the new SpeedFoam Air material, Thru-Slot Speed Pockets for increased forgiveness, and they use the same adjusted sweet spot concept.