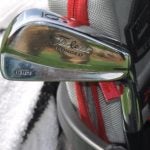 Welcome to another edition of the Fully Equipped mailbag, an interactive GOLF.com series in which our resident dimpleheads Jonathan Wall (@jonathanrwall) and Andrew Tursky (@AndrewTursky) field your hard-hitting gear questions.

I’ve been planning on upgrading my irons and wedges this year — currently Titleist 714 AP2 and Vokey Design SM6 — and am tempted to try and find a great set of older irons and refinish/rebuild them to my specs. My college gamers were Titleist 660 so that’s the thought process. What do you think? — Samuel Howarth

If you listen to GOLF’s Fully Equipped podcast on a regular basis, you know I’m a sucker for a good set of older irons. Maybe it’s nostalgia. Maybe it’s the craftsmanship. Whatever the case may be, I regularly contemplate dropping my current set for something with some mileage.

Is it a smart decision? I’m not too sure. Then again, smart decisions aren’t really my thing. (Case in point: my propensity for taking to the course with only one or two golf balls in the bag.) I’m always going to approve the purchase of an older set. But before you start doing cartwheels and run out to pick up a set of 660s, there are a few things you need to consider.

For starters, make sure the set you’re eyeing has conforming grooves. The 660 was introduced in 2006, which predates the USGA’s 2010 groove rule. I went ahead and checked the governing body’s database to confirm the 660 has legal grooves, but this is something you should always do before ever purchasing a set. I’ve actually heard a few stories of Tour players spending their own cash on a set of refinished irons, only to realize the grooves were illegal once they arrived on-site at a Tour event. I’m serious. Don’t be one of those guys.

You likely won’t have worry about this due to the satin finish found on the 660, but if you have aspirations of picking up an older set — think ’90s or earlier — there’s a possibility you may have to get the heads re-chromed if flaking and/or rust is evident. The Iron Factory is one of a handful of places you can go to if you want to invest in a fresh set of chrome heads. Just be aware this process isn’t cheap and will likely move your bargain irons to a different price point.

Something else to consider is the loft package. Over the last decade, lofts have gotten stronger, even when we’re talking about more traditional blade profiles. It’s important to pay attention to your set gapping in the event you need to adjust your fairway woods/hybrids or wedge setup to match your older irons.

And if you’d rather bend the irons to match your current setup, just remember bending any clubs is going to change the sole geometry (how it interacts with the turf). A good rule of thumb is to not go beyond two degrees (strong or weak) in either direction.

If you’re giving these irons a complete facelift and adding new shafts and grips, make sure you find something with the same shaft tip diameter. It’d also make sense to verify swing weights and confirm your DIY project is going to have a similar feel to your current set of sticks. The same goes for lie angle specs.

And if you don’t have a club building background, make sure a certified club technician is involved to get you to the finish line. Good luck and have fun with the search.