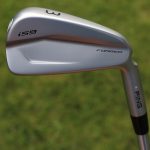 The new prototype Ping i59 irons.

At the 2021 Zurich Classic of New Orleans in late April, Ping staffer Viktor Hovland debuted unreleased Ping i59 irons in the bottom part of his set (7-PW). Although Ping has yet to discuss the i59 designs, technologies, or possible public release, the iron has continued to pick up steam on the PGA Tour. Along with Hovland, Ping staffers Brandon Hagy, Rob Oppenheim, Hunter Mahan and Corey Conners were spotted using i59s at the 2021 Valspar Championship last week.

The i59 iron model is significant because Ping hasn’t released a new iron aimed at better players since 2019 (the Blueprint Forged irons), and the company released its iBlade irons – another popular compact iron among better players – back in 2016. Given the quick adoption of the i59s among Tour players, it seems only natural that a public release could be in the works, but Ping has not confirmed.

For now, though, GOLF.com was able to snap in-hand photos of the new i59 forged irons ahead of the 2021 Wells Fargo Championship. From the photos, it appears there is a fixed weight in the toe section of each iron throughout the set, and judging by the varying degrees of offset between irons, it’s possible there may be a progressive design. Of course, this is all speculation for now.

Enjoy the photos below while we wait to hear more from Ping!